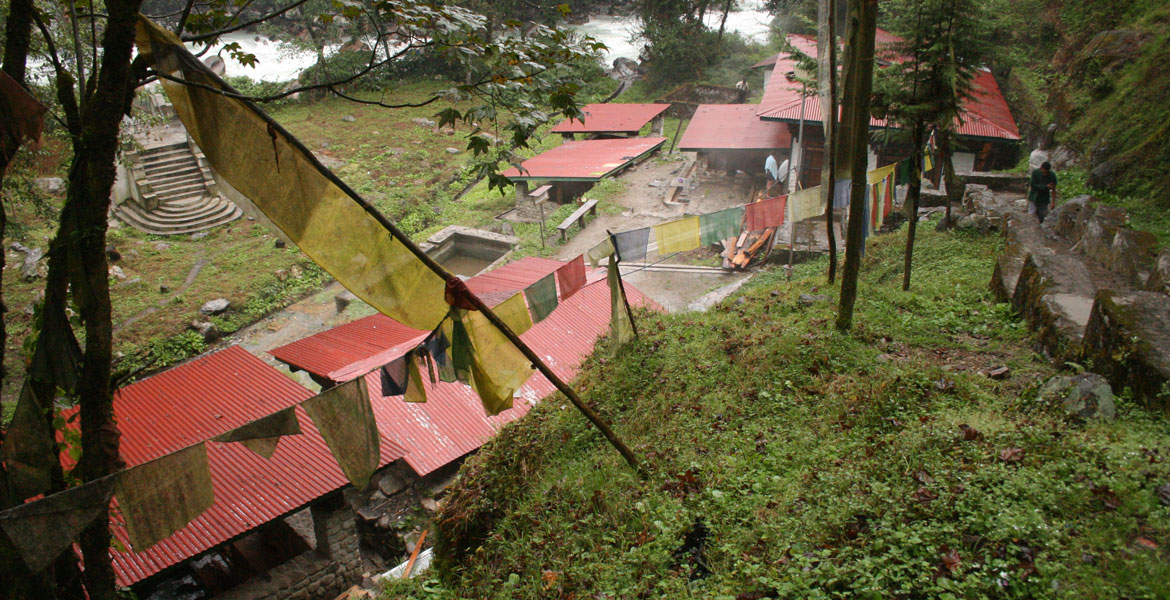 Bhutan is a perfect place to come and take control of your mind, body and spirit. Enjoy yoga retreat in the sacred land of Bhutan with deep spiritual people. Your journey with Wild Mountain Adventure provides a practical aid to the ancient art of yoga harmonizing your mind, body and spirit with hot spring therapy, which is used for centuries by Bhutanese to cure various ailments. The journey takes you through some of the most fascinating sites and places surrounded by nature with non-stop excitement perfectly fit for your adventurous yoga practice to still your mind.

On arrival at Paro International Airport, our local tour executive from Wild Mountain Adventure will welcome you and after short refreshment at the airport, you will then drive to Thimphu, which was established as a permanent capital in 1952-1953, lies at an elevation of 7700ft/2350m, is only 55km drive from the airport and can be negotiable in 1.5 hours. The capital lies in a steep valley with alpine forest with numerous golden-topped monasteries scattered throughout. Having entered Thimphu, you will soon notice that it is unlike any other capital in the world. After your lunch, the drive takes you to Changangkha Lhakhang, which is considered one of the oldest temple in Thimphu dating back to 12th century and was built by the descendent of Lama Phajom Drugom Zhipo. There are meditative calm about this place and time seems to stand still. Your next stop for the day is Trashichhoe Dzong, which can be visited after office hour or during the day on Saturday and Sunday. The history of the dzong dated back to 13th century and Zhabdrung Ngawang Namgyal built the present structure built on the flat land after becoming his property towards the end of 1630. It was built in 1641 and name it Trashichoedzong. During the reign of the 3rd king Jigme Dorji Wangchuk, he made Thimphu his permanent capital and also enlarged the Trashichoedzong in 1962 so to serve as the seat of government. Returning from the dzong your last stop of the day is the Memorial Chorten, which is an impressive monument. It was built in 1974 in memory of the 3rd king who died in 1972 by his mother. The complex is visited by many people from all walks throughout the day and is one of the most public religious place in Thimphu. 06:00am – 06:30am Morning Yoga, 06:00pm – 07:00pm Evening Yoga with class

Excursion to Phajoding Goemba. Today after your breakfast drive further north of Thimphu for one of the most enjoyable hike that takes you to Phajoding Goemba and Simkota Lake. The hike takes you uphill till you reach Phajoding Goemba and can be negotiable in three hours. The stunning walk takes you through rich forest of rhododendron, fir and juniper trees. Reaching Phajoding, the complex got its name from Saint Phajo Drugom Zhipo who meditated here in 13th century and the goempa consist of several monasteries. The two most important temple that can be visited are the Khangzang which was built in 1789 by 9th Je Khenpo, Shakya Rinchen and the Ogmin temple, built in 1789, built by 16th Je Khenpo, Sherab Singye. Continue uphill climb till the ridge which lies at an elevation of 4100m/13,450ft. The view of the valley below is rewarding. Returing back following the same trail visit Thugjidrak Goemba, which is one of the main place where Saint Phajo Drugom Zhipo meditated. The present complex dated back to 1749 and was constructed by 9th Je Khenpo, Shakya Rinchen. Continue your downhill walk till you reached the point where your vehicle will pick you up. In the evening stroll around the downtown of Thimphu. 06:00am – 06:30am Morning Yoga, 06:00pm – 07:00pm Evening Yoga with class

A 30 minutes Morning Yoga (05: 00 am – 05: 30 am). We suggest making an early start, since the panoramic view of the mighty eastern Himalayan range from Dochula can be visible on a clear day and is possibly one of the best spot in the country. The drive takes you through rapid climb and sharp bends may seem even more numerous than usual and allows 45 minutes to reach to the top Dochu-La Pass, which lies at an altitude of 10150ft/3100m. The top is unlike that of any other pass in the country and marked by quantities of prayer flags and an impressive fields of 108 chortens(stupa) called the Druk Wangyel or Chortens of the Victory of the Druk Gyelpo. It was built in 2004 at the initiative of the Queen Ashi Dorji Wangmo Wangchuk as a thanks giving for the victory of Bhutan. Beside this magnificent chorten in its amazing setting the view of the snow-capped peaks of the great Himalaya can be visible like – Mt. Masa Gang (23512ft/7165m), Mt. Tsenda Gang (23288ft/7100m), Mt. Teri Gang (23944ft/7300m), Mt. Jejegangphu Gang (23484ft/7158m), Mt. Kangphu Gang (23524ft/7170m), Mt. Zongaphu Gang (23163ft/ 7060m), Mt. Gangkar Punsum (24735ft/7541m). Your drive from this lofty sport takes you downhill through temperate leaf forest and then through semi-tropical zone where orange, banana, cactuses are found in abundance. As you near Lobesa the vegetation gives way to reforest area where the chir pine grows, a species of unique pine grows in semi-tropical region of the Himalaya. En route stop to visit Chemi Lhakhang located atop a round hillock. It is a pleasant 30-40 minute walk from the road head, taking you through terrace rice fields, farm house and a gentle uphill. It is built in 1499 by the 4th Drukpa hierarch, Ngawiang Chogyel on the site formally blessed by the famous ‘divine mad man” locally known as Lama Drukpa Kunley who built a chorten on the spot. The temple is visited by many people till today and especially visited by women who cannot have children. A few kilometer before Punakha takes you to your hotel. 06:00am – 06:30am Morning Yoga, 06:00pm – 07:00pm Evening Yoga with class

After your breakfast in the hotel, drive to Punakha Dzong which is only 6km from the hotel. The dzong saddles the confluence of Pho Chhu (Male River) and Mo Chhu (Female River) lies at an altitude of 1300m/4430ft. The site has been occupied as far back as 1328 by Saint Ngagyel Wangchuk who built a small dzong (dzong chu) or ‘little dzong’ which is seen even today next to Punakha dzong. In additional the site has been blessed and prophesied by Guru Rinpoche in the 8th century. The main Punakha dzong was built by Zhabdrung Ngawang Namgyel in 1637 and named it Pungthang Dechen Phodrang or Palace of Great Happiness. The dzong is historically important and stands as the symbol for the unification of Bhutan. It is also linked to some of the most momentous event in the history of Bhutan and has served as the capital of Bhutan until 1907. Having spent time admiring the impressive Punakha dzong  walk up through the longest suspension bridge crossing Pho Chhu river where your vehicle will be waiting on the other side of the river and transferred you to the starting point of your hike to Chubu Tshachu. The hike offers an easy 2-hour walk and takes you through lush green forest and beautiful settlement. Reaching the spot, our team will by then ready with your tent and tea. In the evening walk to the hot spring for relaxing in the medicinal water which has been used for centuries by Bhutanese to cure various ailments.

Note: Chubu Tshachu is considered one of the best hot spring therapies in the country and has been visited by many Bhutanese and tourist alike. Locally it has been used for centuries to cure the Bhutanese for various ailments ranging from arthritis, body aches, to even sinuses.

This morning before you leave to Punakha, we suggest you spent a valuable 2-3 hour relaxing and enjoying the hot spring therapy. After your good lunch at the campsite walk down through the same trail where you will be collected and transferred by road to your overnight accommodation in the Punakha valley. 06:00pm – 07:00pm Evening Yoga with class

After your early morning breakfast in the hotel drive further north of Punakha passing the valley of Puntsho Pelri Palace and other home of the nobility. Around 7km ahead lies on the other side of the Mo Chhu on the hilltop the Khamsum Yuelley Namgyel Chorten which was built in 1999. It takes around 1.5 hour’s uphill walk  leading you through crossing the only suspension bridge and then through terrace rice fields with farm house settlement and then pass through the forested area covering with chir pine. The top provides an amazing view of the valley below and other surrounding settlement. Returning back from the temple drive to Khuruthang for lunch and after lunch drive to Paro which takes around 4-hour’s. The drive leads you via Dochu La Pass and then Thimphu city. The enchanting Paro valley is more than beautiful; it is visually stunning and historically fascinating. This beautiful valley is home to the kingdoms only airport and is believed to be one of the first valley to have received the influence of Buddhism with its two historical temple located in the region like – Kyichu Lhakhang and Taktsang Goemba. 06:00am – 06:30am Morning Yoga, 06:00pm – 07:00pm Evening Yoga with class

Hike to Tiger’s Nest is quite an uphill task and it takes around 3-4 hour’s walk. Therefore, we suggest you making an early start. After driving 8km from the hotel, you will then reach a large parking lot where your adventurous day excursion begins. A scenic hike to the magnificent Taktsang Goemba lies at an altitude of 3200m/2950ft is one of the most venerated place of pilgrimage in the Himalaya. Perched cliff side, it is believed to be the meditation site of Saint Guru Rinpoche who flew to the site riding on the pregnant Tigress from the eastern Bhutan. The beautifully located site provides stunning vista and spectacular architecture against a backdrop of sheer granite cliff face. The site has been recognized as most secret and visited by many religious leader and even Zhabdrung Ngawang Namgyel in 1646. The monastery built in 1692 caught fire in 1998 and has damaged the whole complex and rebuilt and restored in the present structure to its formal glory. Return back following the same trail until the parking lot. After lunch drive to visit the historical Kyechu Lhakhang; This is one of the 108 temples built by Tibetan king Songtsen Gyampo in the 7th century to subdue the giant ogress that lay across the whole of Himalaya. It is believed that the temple was built over the left foot of the ogress.  Your last stop of the day is the Jangsa Dumtse Lakhang that lies just out of the Paro town. It is possibly one of the ancient temple built in the shape of a chorten and literally chain down and is locally believe that otherwise the temple will fly off to heaven. It is built by the Tibetan Saint Thongtong Gyelpo in 1421. In the evening stroll around the Paro town. 06:00am – 06:30am Morning Yoga, 06:00pm – 07:00pm Evening Yoga with class

Day 08: Board your flight back to your onward destination