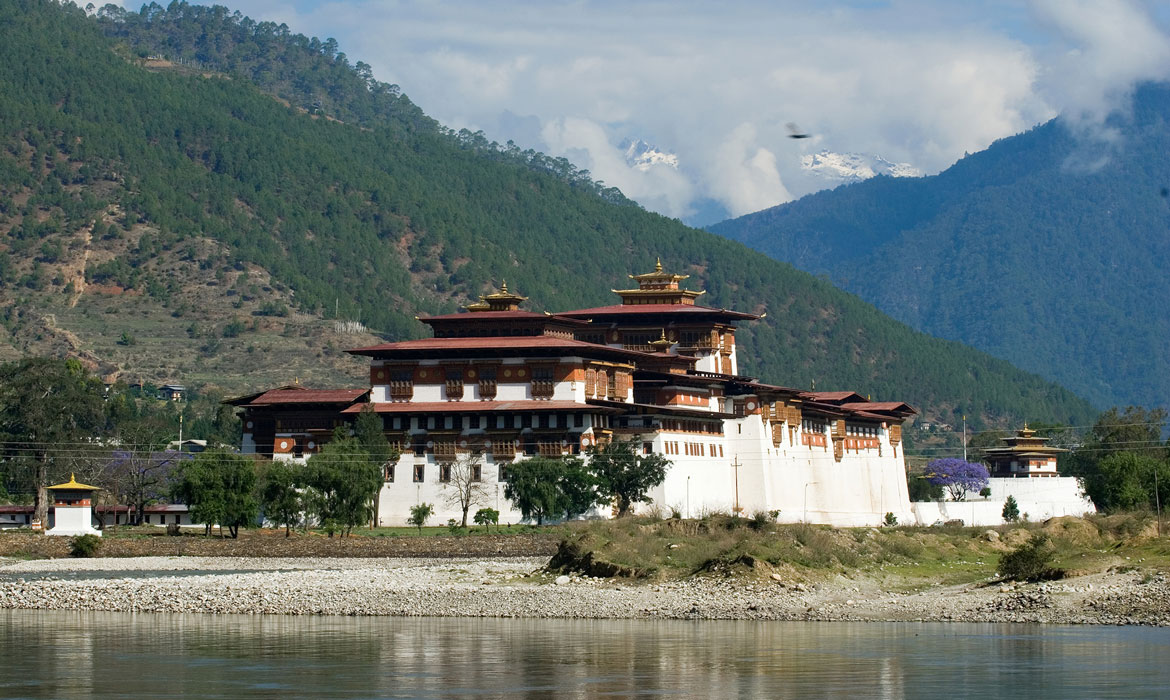 Punakha is the significant region in the heart of Bhutanese history. Punakha was chosen as the capital and seat of the government in 1651, after the unification and the first establishment of Chhoesid Nyiden, the dual system of government. It served as the capital until 1955, when the capital was moved to Thimphu. In 1907, two and half centuries later, Punakha was the seat for the coronation, where Bhutanese people willingly elected Sir Ugyen Wangchuk as the first hereditary king of Bhutan. The first session of the National Assembly was held in Punakha dzong in 1955. Punakha continued to served as the winter capital of the national clergy, headed by His Holiness the Je Khenpo (Chief Abbot) of Buddhism in Bhutan.

Punakha has a wide range of altitude, ranging between 1,200 meters to 4,800 meters above sea level with warm and humid summer and cool winter with an annual rainfall ranging between 500 – 1,500mm. Agriculture farming is the most significant form of livelihood in the region with wide range of cultivation and variety of crops. Double cropping of paddy is also practiced in the region. The major production from the region are red and white rice, wheat, green chili, dry chili, persimmon, bananas and many others.

Punakha Dzong is one of the most impressive and beautiful dzong in the country. The dzong straddles on the confluence of two rivers namely the Phochhu (male) and Mochhu (female) rivers. Its full name is Pungthang Dewachen Phodrang or the “Palace of the Great Happiness”. This extreme impressive fortress was built by the master carpenter, Tuebi Zow Balip under the great command of Zhabdrung Ngawng Namgyel in 1637 and believed to have been completed in two years of time. The site of Punakha Dzong was blessed and prophesied by Guru Padmasambhava in the eight century – “a man name Namgyel will come an built a fortress on the front edge of the hill that look like and elephant trunk”. Punakha Dzong holds the most sacred of all relics, the Ranjung Kharsapani, which was the self created image of Avalokiteswara. It also holds the embalmed body of Zhabdrung Ngawang Namgyel and the remains Terton Pema Lingpa.

Chimi Lhakhang honors Lama Drukpa Kuenley, known across the Himalayas as “Divine Madman”. The name “Chimi Lhakhang” literally translates as “No Dogs Temple” and its story is associated with Lama Drukpa Kuenley who is believed to have subdued a demon called “Loru Duem” residing at Dochu La. The temple is also known as the “temple of fertility” and it is widely believed that if a couple is barren and wants to have children, a visit to the temple and praying to divine madman fulfill the wishes. This small lhakhang was located atop a hillside overlooking the Punatshangchhu River and the surrounding village. It is a pleasant 40-45 minutes walk from the road head.

Chorten Ningpa Shedrag is one of the most significant religious temples in the region that was founded in 15th century, corresponding to the 8th Rabjung. It is said that while Lama Drukpa Kuenley was resting at Jelegang, he saw a group of demoess gathered together on the other side of the hill, seeing this; he threw the burned wood amidst the demoness and subdued them. Later the burning wood sprouted into a vigorous and leafy tree. Seeing this as an auspicious sign he decided to built a temple near the tree. It is in 18th century, Chogtrul Jigme Singye (1742-89), the fourth reincarnation of Lama Thripa (Gyalse Tenzin Rabgyel) visited the site and built a three-storied temple near the tree that is standing till today. It is located further north of Punakha valley. You can reach to this remote and isolated monastery driving up the valley past Khamsum Yueley Namgyel temple and other home of the nobility. It is a beautiful 3-4 hours hike from Serigang village, through terrace of cultivated fields, scenic valleys, picturesque surrounding, remote and pristine ecology.

Goen Tshephu Ney (sacred cave) is associated with the 8th century saint, Guru Padmasambhava. It is said that after Guru’s retreat at Maratika in Nepal, he visited this sacred cave and it is here that Guru Padmasambhava was able to see the full form of Amitayus “the Buddha of Long Life”.  Later a monastery was founded by Tsephu Trulku Gyeltshen Pelzang, a follower of Saint Goe Tsangpa. Among the many relics in the temple, the gold-plated replica of Zhabdrung’s hat is the main one. It is a pleasant 2-3 hours walk from the small community of Mitesgang. Mitesgang is around 15 kilometer drive from Khuruthang town.

A seven kilometer drive further north of Punakha valley – past several royal palaces and other home of nobility on a hillside lays a newly built Khamsum Yuelley Namgyel Chorten. It is a pleasant 1-2 hours walk from the road end, through cultivated fields and up a gentle slope. This chorten was built recently as 1999 after a mammoth eight years construction period. The chorten signifies the removal of negative forces and promote peace, stability and harmony in the changing world. It occupies the permanent place in the landscape, overlooking the Mochu (Female) River and a view towards Kabesa village in the north and Punakha valley towards south.

Talo Sanga Choling goemba built on a high hillside has a breathtaking view of the surrounding villages. This beautiful goemba was founded by Chogtrul Jigme Singye, the fourth reincarnation of Lama Thripa Galsey Tenzin Rabgyel. It was later renovated and built a monastery in the 19th century by Lama Jigme Drakpa, the third mind reincarnation of Zhabdrung Ngawang Namgyel.

Punakha is also famed for its popular two hot springs in the country. The Koma Tshachhu is a vigorous two hours walk from the road head and the famed Chubu Tshachhu is another one and half hour walk from the feeder road. Tshachhus are renowned for its medicinal properties, drawing numerous locals as well as tourists.