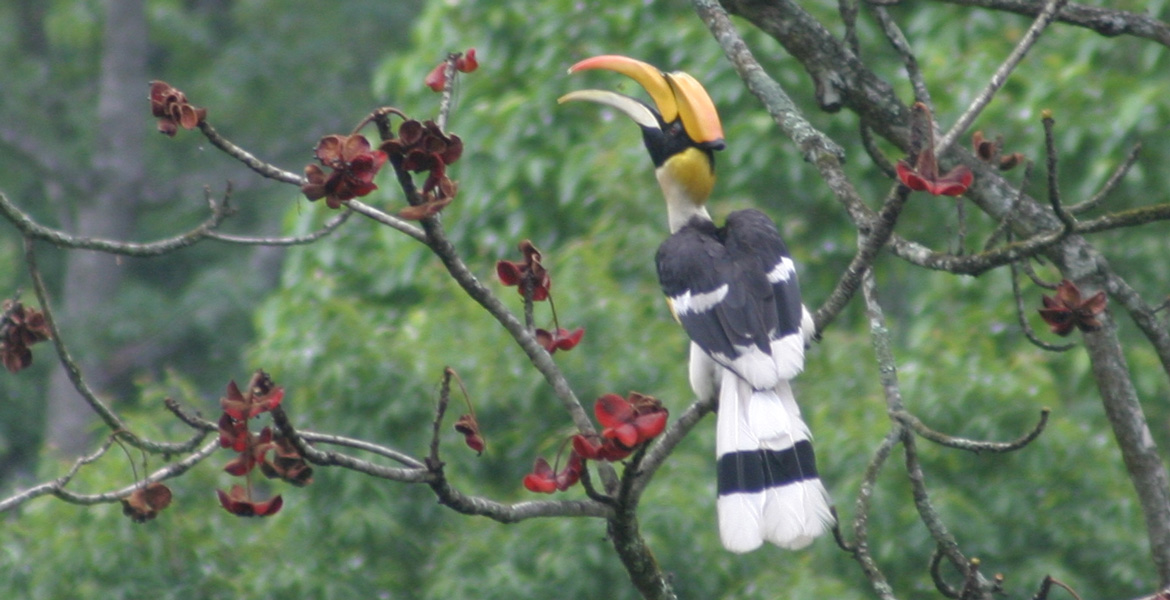 The Tingtibe Bird Festival Tour is rated one of the most spectacular and popular route taken.  It takes you from Samdrup Jongkhar to Tingtibe under Zhemgang district traversing through several mountain passes, lush green valleys and rich Himalayan ecosystem – which is home to many endangered bird species. This birding journey truly offers unique opportunities for bird enthusiast to search and spot not only the common birds but also some of the globally threatened birds including the Imperial Heron, which is one of the fifth rarest birds in the world and other species including the beautiful Nuthatch, Black-necked Stork, Blackish-breasted Babbler, Blyth’s Kingfisher, Gray-crowned Prinia, Great Hornbill, Rufous-necked Hornbill, Rufous-throated Wren-babbler, Satyr Tragopan, White-throated Bushchat and White-bellied Heron etc.

On arrival at Guwahati airport our representative from India will pick you up and transfer you to Samdrup Jongkhar – one of the land entry points to Bhutan.  The major portion of the region falls within the sub-tropical belt and lies between an elevations of 200m – 4,200m above sea level. Overnight in Samdrup Jongkhar town.

After your leisurely breakfast in the hotel, check-out and drive to Narphung. It is only 41km drive and can be negotiable within 2 hour; however birding stops will entail extra time. Your two days birding in Narphung remain within the upper limits of warm broadleaf forests of teak, tall bamboos, sal and sisoo.

We suggest you to make an early start since the drive from Narphung to Trashigang is quite a tiring one.  Trashigang is one of the largest districts in Bhutan and spans the easternmost corner of the kingdom. The district was once the center of busy trade with Tibet and India. The district lies within an elevation of 600m – 4,500m and a temperate climate with an annual rainfall ranging from 1,000mm to 2,000mm.

After your morning breakfast check-out hotel and drive to Mongar previously known as Zhongar and lies within an elevation of 400m – 4,000m. The drive from Trashigang to Mongar is about 90km and can be easily negotiable within 4 hours.  One of the finest hotspot for bird en-route is the korila pass (7800ft/2378m) and the surrounding inhabited by cool-broadleaved forest. Some of the birds you can spot in the surrounding areas are Rufous-necked Hornbill, Crested Laughingthrush, Streaked Laughingthrush, Black-faced Laughing Thrush. White-throated Laughing Thrush, Pygmy Blue flycatcher, Blue-throated flycatcher, Blue-fronted Flycatcher, Green Magpie, Bonelli’s Eagle, Barn Swallow, Hill Prinia, Grey-winged Blackbird, Brown-throated Tree Creeper, Grey-sided Laughingthrush, Little Bunting, and Wall Creeper etc.

Your destination Bumthang lies between 1,800m – 5,400m and the fascinating valley is the spiritual heartland of Bhutan and home to some of the oldest temple and monasteries in Bhutan. Your drive from Yongkola to Bumthang takes your through Thrumshingla Nation Park.  In the morning you will pass through entering forested stretch and gradually emerge on to plateau at Sengore (9700ft/2957m) and then after 20km you will finally get to the top of Thrunshingla Pass at (12,000ft/3659m). En-route you will come across several lovely waterfalls and large track of old growth Fir forest.  The forest type in theis region are warm and cool broadleaved forest, Hemlock, Fir, Rhododendron and mixed conifer and blue pine forest.

Today in the morning hour you will be led for a short cultural sightseeing in Bumthang. Visit the  prominent Jambay Lhakhang built in sixth century and Kurjey Lhakhang dedicated to saint Guru Padmasambhava who was suppose to have meditated here in the 8th century are some of the permanent attractions to thousand of devotees from Bhutan and overseas. Visit other cultural sites including Jakar Dzong, Tamshing Lhakhang and Wangduecholing Palace. After lunch drive to Trongsa which is only 68km and takes around two and half hour.  Your drive takes you through various ecotypes; Blue pine forest, mixed conifer forest and fir forest and then enter the broadleaved forest after crossing Yotongla Pass (11,000ft/3354m).

Today at your early morning breakfast in the hotel drive to Tingtibe, under Zhemgang district.  The region is blessed with incredibly rich biodiversity and the lush forest of the region is also home to 22 endangered animal species including the Golden Langur. Zhemgang lies between an elevations of 100m – 4,520m. Your drive takes you through warm-broadleaved and chir pine vegetation zones.

Today you will participate in the theme base bird festival, celebrating the country’s richest birdlife.

Today your drive tkes you from Chir pine forest to the sub-tropical broadleaved forest.  Gelephu lies in the south-central flanks of Bhutan, on the edge of Indian Assam state.  The terrain ranges from 200m to 3,600m above the sea level.

Early morning checkout hotel, after completing your exit formalities depart to Guwahati (India). It is about 235km and can be negotiable within 3-4 hours. You can also choose to fly off from Paro by taking the domestic flight from Gelephu to Paro and depart to your onward destination from Paro International Airport in the western Bhutan.