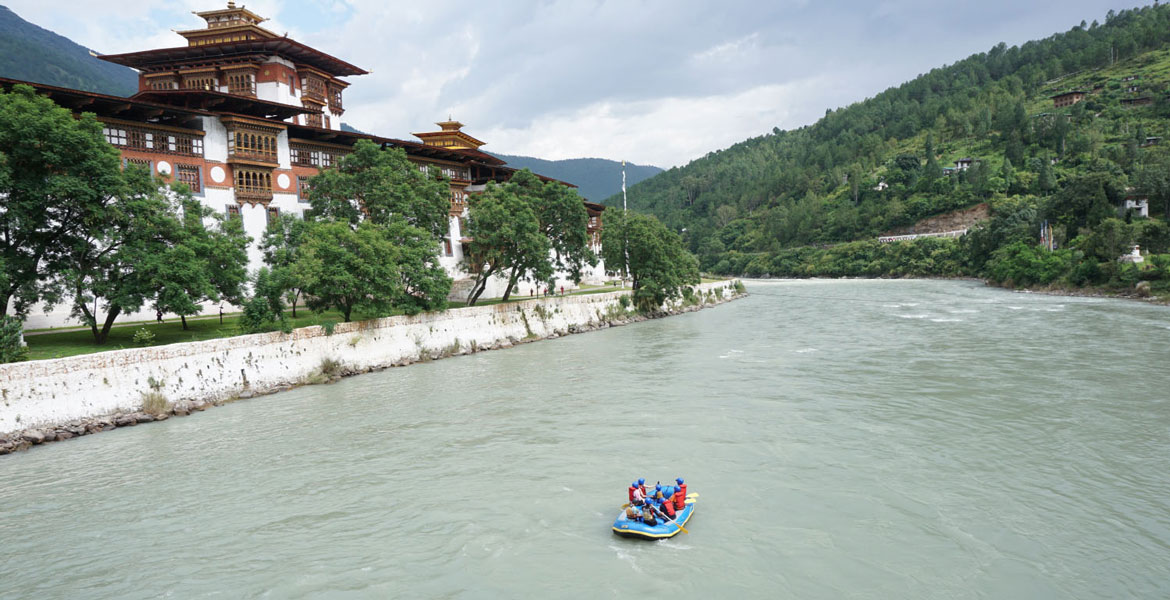 The Puna Tshang Chu (river) is one of the largest river in the western region with its tributaries of Mo Chhu River, which flows from the left side of the Punakha Dzong having is source from the glacier lakes of Gasa valley. Pho Chhu River also has its source from the glacier lakes of Gasa valley, which flows through the right side of Phnakha dong and finally meets below the Punakha dzong. This two river forms Puna Tshang Chhu immediately after the Punakha dzong and flows through Wangdue and joined by Dang Chhu which flows from the west and enters a precipitous gorge. The Puna Tshang Chhu rafts & kayaks can be best floated in the month of March – April and November – December.

Punakha and Wangdue district is the close district and located both at an altitude of 4430ft/1350m. It is only 13 Km drive from the main Khuruthang town of Punakha to Wangdue town. The route from Punakha takes you along the Puna Tshang Chhu River which later joins by Dang Chhu River to form the Sunkosh River in the south. Both Punakha and Wangdue are much warmer compare to other western districts of Bhutan. Punakha was served as the capital of Bhutan and was the seat of the government 1955 when the capital was moved to Thimphu. Punakha has been inextricably linked to some of the most monometers events in the Bhutanese history and deserves its reputation as one of the most beautiful and significant provience at the heart of Bhutanese culture.  Wangdue is another province in the western Bhutan bordered by Punakha in the north. Wangdue is one of the largest districts with an area of 4308 square kms with an elevation ranging from lowly as 800m and rise up to 5800m. With its large area cover from the northern snow-capped mountains to the cold damp glacier valley of Phobjikha, to the warm and breezy town of Wangdue. The province is also one of the important gateways to the further central, eastern and southern districts of Bhutan.

Both Punakha and Wangdue because of its low elevation and rich fertile soil, the region are famous for rice farming. Both red and different types of white rice are grown along the valley of Pho Chhu, Mo Chhu, Puna Tshang Chhu and Dang Chhu. The scattered village’s houses are made up of beaten mud with stone foundation and with pattern of woods, which is used in decorative looks of the windows and doors with height of two to three storied.

Jigme Dorji Wangchuk National Park: The Jigme Dorji Wangchuk National Park is one of the fully operated parks in the country with its location range from Punakha, Gasa, Thimphu and Paro, covering around 434950ha. Having the largest protected areas of conservatory of glaciers, alpine meadows, scrublands, sub-alpine, temperate conifer forests, warm and cool temperate broad-leaved forests, major rivers and streams, and the flora and fauna that inhabits the ecosystem. It is also home for many endangered animal species like- Takin, Snow Leopard, Blue Sheep, Musk Deer, Himalayan Barking Deer, Red Panda, Marmots and several bird species. There are several medicinal plants found in the park used for commercial, medicinal, traditional and religious values.