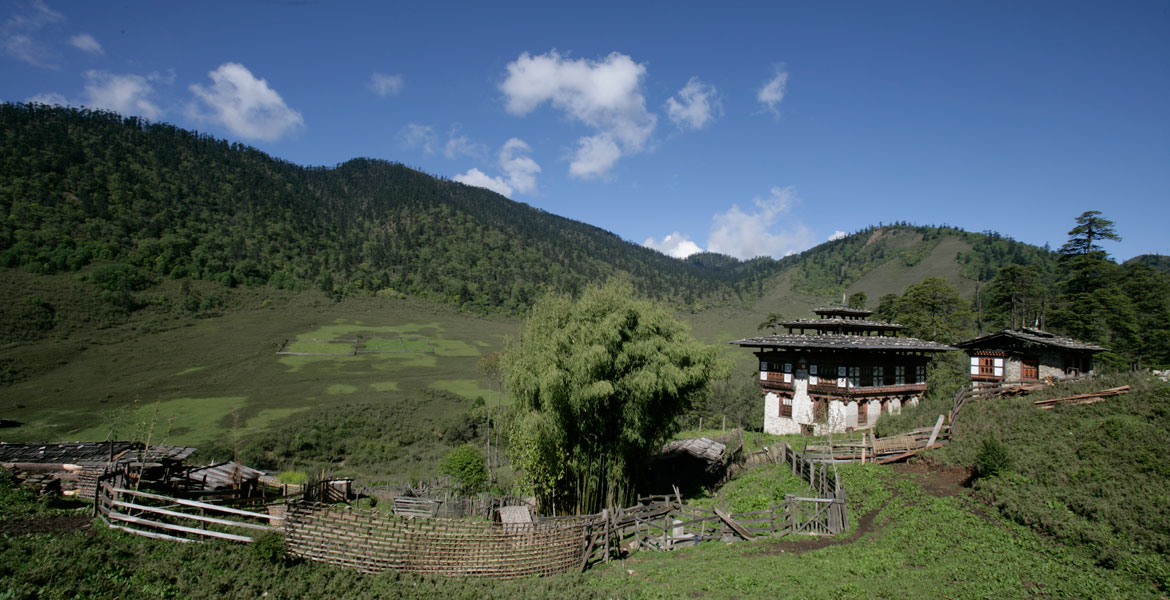 Explore the living cultural heritage of Bhutan, which has remained remarkably unblemished. On this tour, we will take you one-step deeper into Bhutan, where few tourist go. We will make you experience to a great degree where the age-old traditions are vibrant and continue to have clear significance in everyday life of the Bhutanese people. You will experience the typical Bhutanese lifestyle, meet the good-natured, friendly and fun-loving people, and explore the ruggedness of the terrain and the remoteness of its valleys. Partake in butter tea, shared a meal or simply sit together to exchange knowledge and stories.

Upon your arrival at Paro International Airport, our local tour guide and driver will greet you. After short introduction, you will be led for a half day sightseeing in Paro valley. The wide and fertile valley of Paro has both ancient and modern face. The beautiful valley is home to some of the oldest and most revered temples in the country and the valley side is dotted with elegant traditional Bhutanese farmhouses and terrace rice fields that are considered the most beautiful in the country. Your sightseeing of the day includes a visit to the impressive Paro Dzong lies just above the town overlooking the valley below. It was built in 1645 by Zhabdrung Ngawang Namgyel when the old Hungrel fort was handed to him by the descendent of Hungrel. The dzong houses both the administrative centre and the religious body. From here, your drive takes you further uphill above the dzong to visit the Ta Dzong (Watch Tower) which is now functions as a repository not only for the fine art but also costumes, armor and other handcrafted objects of daily life providing an insights for visitors regarding the rich cultural heritage. Your next stop before lunch is Dumtse Lhakhang which lies just 5 minutes walk away from the town. This round circular temple was built by Drubthob Thongtong Gyelpo popularly known as “Iron Chain Bridge Builder” in the year 1421. It is said that the temple is literally chained down to the ground, local people believes that otherwise it will fly off to heaven. Walk back to the town through the bridge above Paro Chhu and stop for lunch in the town.

After lunch, drive to Thimphu the capital city. Your road journey from Paro to Thimphu is 65km and takes around one and half hours drive. It takes you through rich settlements and terrace of paddy fields. The capital lies at a steep valley surrounded by alpine forests. Reaching Thimphu check in to your hotel and after short rest drive to visit Trashichhoe Dzong ‘the fortress of the glorious religion’ housing the throne room of His Majesty the king, the main secretariat building and the central monk body.

The capital Thimphu has something for all visitors. In the morning hour drive to visit the National Institute of Zorig Chusum (13 Arts & Crafts) which offers a six years course on Bhutan arts and crafts. Visit the National Library just close to the National Institute. It was opened in 1967 to preserve the ancient Bhutanese texts and act as a repository for thousands of old religious manuscripts and religious books. Driving further south visit the giant Buddha statue that stands atop the hillside overlooking the valley below. Coming down visit the complex of National Memorial Chorten which was built by Her late Queen Ashi Phuntsho Choden Wangchuk built in 1974 in memory of her late son the Third King Jigme Dorji Wangchuk. The complex is visited by thousands of people from all walks of life. If you are here in the weekends the market offers an amazing looks of the freshly products sold by different people. If time permits make a short visit to the National Archery Ground to watch the archery match.

A scenic drive takes you to Punakha crossing Dochula Pass (10150ft/3100m). We suggest you making an early start since, the view of the great Himalayan Mountain range can be visible on a clear day. Beside these magnificent views, the pass also offers a magnificent 108 Chortens in its amazing setting built by Her Majesty Ashi Dorji Wangmo Wangchuk in 2004. From this lofty spot, it is downhill for 38km till you reach the small village of Lobess that lies somewhat lowly 4430ft/1351m. The descent is mainly through rich forest of Magnolia, Oak and other broad-leaf forest with scattered settlement and terrace rice fields. As you near Punakha en-route stop to visit Chhemi Lhakhang lies atop a barren hillside. It was dated back to 1499 and was built by Lama Ngawang Chogyel built in honor of his brother Lama Drukpa Kuenley. Continue your drive further 12km to visit the giant Punakha Dzong locally known as ‘Pungthang Dechen Phodrang’ or “Palace of Great Happiness’. This beautifully located dzong saddles the confluence of Pho Chhu and Mo Chhu river and resembles the giant battleship. It was built by Zhabdrung Ngawang Namgyel in 1637 and today it houses the winter capital of monastic body.

At your early check out drive to Trongsa (2316m) the sacred and temporal heart of the kingdom. The region has a significant place in the heart of Bhutanese history connected with the linage of Bhutan’s kings. Trongsa in the central hub of the kingdom is historically the place from where attempts at unifying the country were launched. Your drive takes you cross the Black Mountains via Pele La Pass (11,070ft/3375m) surrounded by a small Chortens and prayer flags. From this lofty pass the drive, gradually descend downhill crossing several village and farmhouses. Reaching Chendebji stop for lunch and after lunch a leisurely walk up to further end takes you to Chendebji Chorten on the bank of Nikka Chhu. This startling white stone Chorten was built in Nepali style with eyes painted on four sides. It was built in the eighteenth century by Lama Shida of Tibet to suppress a demon who had been troubling the inhabitants of the valley. From here to Trongsa it is only 45km and at some point en-route the awe-inspiring Trongsa Dzong can be seen before you reach Trongsa. Reaching Trongsa check in to your hotel and rest day at leisure.

In the morning hour, visit Trongsa Dzong that lies just below the Trongsa Town sits on a small ridge overlooking the Mangdue Chhu. The dzong is possible the most impressive in the country – and the complex truly harmony with the surroundings. Though it dates back to 15th century, the original structure that you see today was buily by Chhgyel Minjur Tempa in 1644, following the instruction of Zhabdrung Ngawang Namgyel and named ‘Druk Minjur Rabten Tse Dzong. After the dzong climb up to the Ta Dzong (Watch Tower) of Trongsa Dzong. It is now converted into a museum. Having taken the sights of Trongsa proceed to Bumthang. The road journey climbs steep above Trongsa for 29km till you reach the pass Yotong La at an elevation of 11,000ft3354m. The road gradually descend downhill passing through several rhododendron, fir and juniper forest and finally enters Getsa the first village of Bumthang. The road passes several farmland and then climbs to Kiki La Pass (9300ft/2835m). From the colorful pass, your destination Jakar can be reached within 30 minutes and lies at an altitude of cool 8450ft/2573m. Reaching Jakar drive straight to your hotel. Overnight in farmhouse.

Jambay Lhakhang Drub festival is held at Jambay Lhakhang. The temple was built in the 17th century and is one of the oldest temples in the country. During the festival several mask dances and the bonfire commemorate the establishment of the temple. The highlight of the festival is the fire ritual that is held by midnight where a crowd gathers to witness the ritual. A naked dance is also performed where the dancer only where the masks on.

Today after your early hotel checkout drive to Punakha. En-route stops for break and other available sightseeing.

Before departing to Paro in the morning hour, drive further north of Punakha to visit the impressive Khamsum Yueley Namgyel Chorten. It takes only 30 minutes till you reach the parking lot near the suspension bridge. From this spot the walk up to the temple is only 1 hours and takes you through crossing the suspension bridge, terrace of rice field and farmhouses. The temple lies on a hilltop overlooking the valley below and offers breathtaking views of the surrounding valleys and the mountains.  After the temple return to Khuruthang for lunch and then proceed to Paro.

It is now time to embark on your somewhat arduous adventure of the day ascending the 3000ft cliff reaching the most spectacularly located Goemba in all of Bhutan the Tiger’s Nest or Taktsang Goemba. Legend says Guru Rinpoche visited the site in the 8th century flying form the eastern Bhutan on the back of a tigress (a form that one of his consorts is believed to have taken). He meditated in the cave for three months and with his terrifying form of Guru Dorji Droloe subjugated the evil spirit Singye Samdrup. Following his visit many permanent Buddhist masters and saint came to visit the sites including the notable Milarepa, Labdoenma, Thangtong Gyelpo, Zhabdrung Ngawang Namgyel etc. Today Taktsang is one of the most visited pilgrimage site throughout Himalayas. Returning back your next stop of the day is Kyechu Lhakhang, taking you back to the time and history. The temple is the reservoir pf peace, where you will really feel peace. Just close to the temple a house now turned into a museum dedicated to the late Delgo Khyentse Rinpoche and you can come across several photographs and artifacts belonging to Rinpoche. Drive back to Paro town and stop for your last day shopping and buying gifts for your friends and family.

After your leisurely breakfast in the hotel, drive to airport for your next flight. Your guide and driver will see you off.