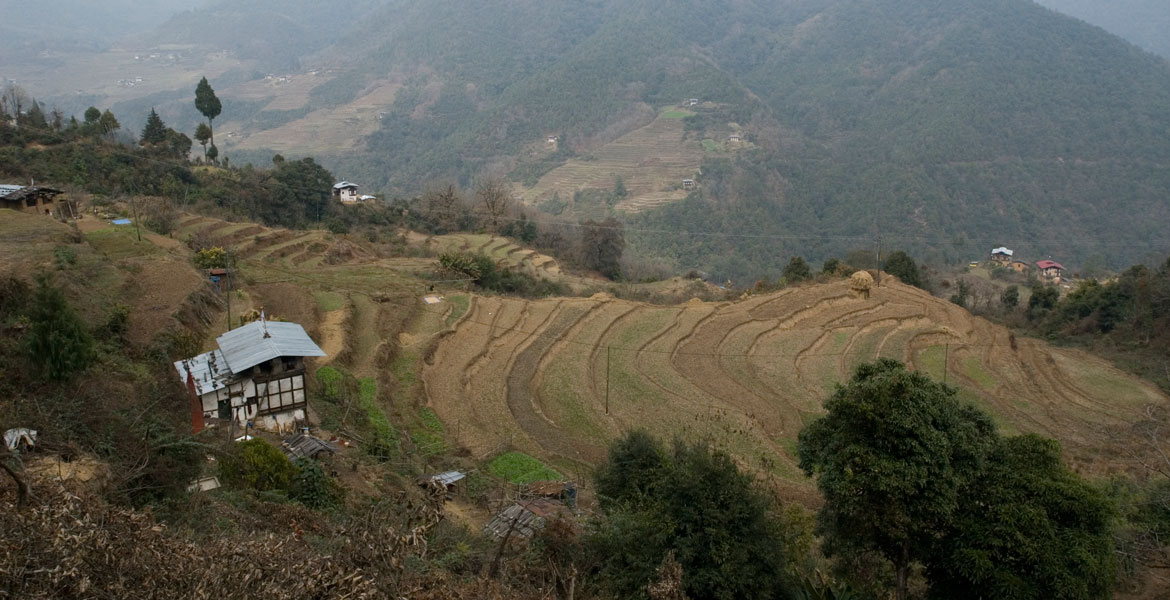 At your arrival at the Paro Airport, meet with your local representative and lead you to the fascinating and booming capital Thimphu lie at an altitude of 7700ft/2350m will receive you.  Driving along the way of Wang Chhu(river) through scrub vegetation. The drive takes you through widen gentle slopes, terrace rice fields and lovely stand of conifer trees. Entering the city visit the Simtokha Dzong(fort). This is the oldest dzong(fort) built by Zhabdrung Ngawang Namgyel in the year 1629. Today it houses the large monastic school in the country. From here drive further through the expressway, the capital is unlike that of any other capital of the world with no high-rise building and with no traffic lights – the traffic is directed by the policeman.  Check in to the hotel and after short rest drive to visit the National Memorial Chorten(stupa) lies in the heart of the city. This stupa is built in 1974 by the late grand queen mother Ashi Phuntsho Choden, built in memory of her son the third king of Bhutan.  Drive further uphill to visit the giant golden Buddha Statue of Buddha Dodrelma overlooking the valley, driving back through the same route you will finally reach Changangkha Lhakhang, the oldest temple in Thimphu dated back to fifteenth century built by the descendent of Phajo Drukgom Zhipo. Heading further a few minutes you will reach the Mini-Zoo, a large enclosure that holds the strangest looking creature you are likely to see – the “Takin” National Animal of Bhutan. Following downhill you will pass the Drubthop Gompa a small building surrounded by prayer flags that now house the Zilukha Nunnery housing 40-50 Nuns. In the evening, visit Trashichhoe Dzong(fortress) the main secretariat building. This massive building houses partly the government administration and the Central Monastic Body.  It was rebuilt in 1641 by Zhabdrung Ngawang Namgyel. Trashichhoe Dzong can be visited only after five pm in the evening. After exploring this massive fortress drive to your hotel.

We suggest making an early start since on a clear day the view of the magnificent Himalayan range from the Dochu La Pass is one of the best in the country. The pass lies at an altitude of 10150ft/3100m and its only 22km from your hotel. Reaching the top the Pass is unlike any other pass in Bhutan surrounded by one hundred and eight stupas circumscribing a single large Chorten (stupa) built as recent as 2004 and known as the Druk Wangyel Chorten(stupa) “ the Chortens of Victory of  the Druk Gyelpo”. Beside this beautiful stupas the pass also offers a magnificent and panoramic voew of the great Himalayan Peaks like – Mt. Masagang(23501ft/7165m), Mt. Tshenden Gang(23288ft/7100m), Mt. Teri Gang(23944ft/7300m), Mt. Zongaphu Gang “Table Mountain”(23288ft/7100m), Mt. Gangkar Puensum(24735ft/7541m), Mt. Jejekhangphu, Mt. Kangphu Gang ( all above 23288ft/7100m). From this beautiful spot, the drive descent downhill though lovely landscape covered with mixed forest, scattered settlement and terrace rice fields.  On arrival at Sobsokha Village which lies at lowly as 4430ft/1352m, a 30-40 minutes’ walk from the road head takes you through rice fields and clustered village with a gentle uphill to Chemi Lhakhang which means “No Dogs Temple”. This popular small temple was built in 1499 by Lama Ngaeang Chogyel in memory of his brother Lama Drukpa Kuenley the “Divine Mad Man”. Returning drive to visit Punakha Dzong which is only 12km.

Drive further north of your hotel towards Punakha Dzong for your adventurous trek. After passing through the magnificently imposing Punakha Dzong, thre trail takes you further through paved road and shortly you will reach the longest suspension bridge over the Pho Chhu (river), crossing through the bridge walk up to the Shengana village. Your trail takes you uphill through blue pine forest and good valley view of the Punakha region and finally lead you to your campsite at Limbukha at an altitude of 1980m.

Your today’s trail begins with a uphill climb from above the village of Limbukha through dense forest of mixed trees, rhododendron and oak forest. Crossing the ascend uphill your trail finally descend downhill through lush green forest, terrace rice field, scattered settlement and scenic landscape down to your campsite at Chhungsekha, which is a small village of about ten house hold. Your trail takes you through crossing a holy religious stone and an impressive giant Cyprus tree that reminds the story of Lama Drukpa Kuenley popularly known as the “Divine Madman”. Your campsite is located at an elevation of 1550m.

Today your trail takes you through beautiful local farmhouse and settlement. The region is known as Shaa region and home for the ancestral home of Pema Tshewang Tashi( a knight whose ornamental speech is famous and still practiced by the locals in this region. The people are more open and welcoming as you traverse through their village. Visit the ancestral home of Pema Tshewang Tashi spent time with the local of this area in unfolding the story of Pema Tshewang Tashi and his noble work. Descending downhill and then crossing a small stream you finally ascent uphill through different villages and finally reach your campsite at Samtengang near the Samtengang High School and a small lake. Your campsite lies at an altitude of 1830m.

Your morning trail takes you downhill through terrace rice field, Oak , and blue pine forest. It is only a short walk downhill from the campsite to the main road head. Reaching Chhu Dzomsa you will pick up by your transportation and take you to your hotel. After lunch visit the Nalandra Buddhist Institute and Talo Goempa in Punakha.

Today at your early breakfast in the hotel, drive to Paro via Dochu La Pass and Thimphu city. Reaching the picturesque Paro (2280m) visit the impressive Paro Dzong or Paro Rinpung Dzong ‘the Fortress on the Heap of Jewels”. According to the history, in the fifteenth century, a man name Gyelchok, the descendent of Phajo Drukgom Zhipo, who came from Tibet after completing his theological studies, settled by building a small meditation hut for himself, Later it his descendent took control of it and built a huge five storied building. In 1645 it became the property of Zhabdrung Ngawang Namgyel, rebuilt on the present location, and completed in 1646. Drive to National Museume which once was a Watch Tower of Paro Dzong. Returning back stroll around the downtown of Paro.

We recommend making an early start. The famous Taktshang Goempa perched 3000ft/915m cliff side is one of the most spectacularly located Goempa in Bhutan. The hike to the Goempa takes around 3-4 hours from the parking lot at an average speed. Legend says that Guru Rinpoche visited this site flying on the back of the Tigress from eastern part of Bhutan and underwent meditation for three months. In addition, he transformed himself in his wrathful form of Guru Dorji Drolo and subdued the evil spirit residing here. The cave became well-known from his time till today and is one of the holiest pilgrimage site in Bhutan. Descending downhill from Taktshang Goempa drive to visit the historical Kyechu Lhakhang dated back to seventeenth century. After the temple drive to Paro town and then to your hotel.