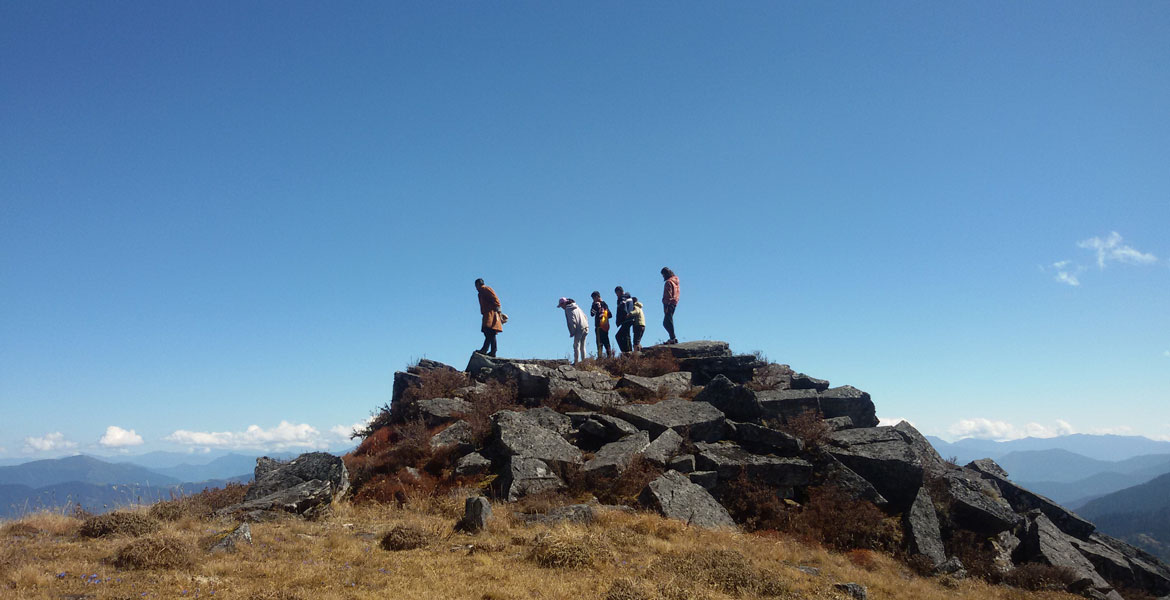 Saga La Trek is notably the short three days trek that begins from the remote region of Haa and ends up close to the ruined Drukgyel Dzong in the northern end of scenic Paro valley.  This nature trek offers the opportunity to be surrounded by wilderness as you traverse through densely wooded forests, mountain passes with panoramic views and through fields of green, yellow and brown carpeting the valley floor. It truly offers something to all type of travelers opt for sort trek.

Arrival in Paro you will be met by your local Bhutanese tour guide and transfer you to your hotel. The valley is more than beautiful; It is visually stunning and historically fascinating. This beautiful terrace valley is home to many of Bhutan’s oldest temple and the only airport is located in this valley. After a short refreshment in the hotel drive to visit the impressive Paro Dzong – an awesome and impressive introductory to the world of dzongs that lies ahead of the Paro town overlooking the valley below. This massive fortress is built in 1646 by Zhabdrung Ngawang Namgyel on the old site of Hungrel Dzong so name to honor Paro’s guardian deity, Humrel Gompo. After the dzong drive further uphill to visit the National Museum which is a repository of art, costumes, armors and other hand crafted objects of daily life. Formally, it serve as the watch tower since 1967. From here the dive takes you down hill and en route visit the Jangsa Dumtse Lhakhang which lies just outside of the town. This temple is one of the ancient temple built in the shape of chorten and it is literally it is chained down to earth since local people believe that otherwise it will fly off to heaven. This temple was built in the year 1421 by Tibetan saint Thong Tong Gyelpo, who came to Bhutan in search of iron ore. Drive to the small town of Paro which was actually a village turned into a small town. As you walk around the town visit the Druk Choding Temple which was built by Lam Ngawang Chogyel, one of the prince-abbot of Ralung in Tibet and an ancestor of Zhabdring Ngawang Namgyel and built in 1525. After spending good time in the downtown of Paro drive to your hotel for leisure.

Today your dive takes you to the remote Haa valley via Chele La Pass, which is notably one of the highest motor pass in Bhutan. The pass lies at a cool crisp 3988m and your drive takes you uphill ascend from the Bondey valley taking you through a spectacularly lovely forest of oak, pine, rhododendron that are in bloom in the month of April and May. The top of the pass also offers panoramic view of the distant Himalayan show-capped peaks like Mt. Jomolhari towering at 24000ft/7314m and the view of the valley below. From here, your drive brings you delightful sojourn in the Haa valley. Reaching the beautiful Haa valley visit some of the interesting historical places and temples. More likely, we suggest you making a visit to the well-known Lhakhang Karpo (White Temple), It houses the district monastic body of Haa. Legend says the ray of the light once emanated from the body of King Songtsen Gampo and the Lhakhang Karpo was built on the site where the white ray of light had fallen. Lhakhang Nagpo (Black Temple), was built where the black ray of the light had fallen. After visiting this two important historical temple drive to visit the small town of Haa.

Today after your breakfast in the hotel drive further north until you reach Yangton (2735m) where your trekking crew will wait to see you. As you setup for your onward trekking journey the trail takes you steep uphill climb to the Yangtong Goempa (temple) and its surrounding village. The temple is dedicated to Guru Rinpoche and his eight manifestations. After a short visit to the temple you trail takes you through blue pine forest below Saga La Pass. The trail takes you through the Makhang Chhu, which flows through the Talung village, which comprise of three villages with eighty household. The trails winds through terrace of farmland and finally climb up to the wooden bridge which is called iron bridge, said to be built by the iron chain bridge builder in the 15th century. Traversing through meadows and forest you then reach to a interesting site where a rock with twin eyes and distorted mouth can be encountered. Legend says that Lama Thong Tong Gyelpo subdued the demons by slashing the demons mouth on the rock with his powerful magical sward of ignorance and its believed that ever since the trail was used without fear of the demon. After a short walk you then reach to your campsite at Khadey Gom which lies at an elevation of 3235m.

Your trail begins with ascend uphill through meadows and conifer forest until you reach the Saga La Pass which lies at an altitude of 12200ft/3720m. As you ascend your uphill climb you then finally reach the top of the pass which is marked by a small chorten (stupa) surrounded by colorful prayer flags. If the weather is clear, the pass offers an amazing view of the valley with some of the permanent snow-capped peaks like Mt. Jomolhari towering at 24000ft/7314m. The pass also offers the bird-eye view of the Tiger’s Nest Monastery perched on the Cliffside on the face of the rock at an elevation of 9700ft/2950m. From the pass the trail takes you downhill through mixed forest of conifer and rhododendrons and finally brings you to the campsite at Dongney Tsho which is surrounded by huge fig forest. Your campsite lies at an elevation of 3200m.

Today your trail begins with a downhill trail until you reach Genchu Zam Bridge. The trail takes you through thick vegetation and the trail offers you a chance to see some of the bird species like magpie, laughing thrushes, nutcracker and pheasant, which are common in the area. As your trail continues, you then enter another small village with a small temple and from here the trail takes further gradual downhill until you reach the Balahka Chhu which is the end of the ancient Haa trail. Your car will pick you up finally and takes you to your hotel.

We suggest making a reasonably early start to embark on your somewhat arduous adventure of the day. From the parking lot your trail ascend uphill to the most spectacularly located goemba in the Bhutan. It lies at an elevation of 3000ft/915m from the valley below. The task is quite an uphill and it takes around 3-4 hours at an average speed. This magnificently located goemba built amazingly on a cliff is said that Guru Rinpoche visited the site riding on the back of a tigress and meditated in the cave and hence it is called “Tiger’s Nest”. This site has been recognized by many religious leaders and even Zhabdrung Ngawang Namgyel made his visit in 1646. The actual monastery built in 1692 has been completely burned down in 1998 and in the same year, it was rebuilt and finally consecrated in 2005. Returning back following the same trail to the parking lot you then drive to visit the ruined Drukgyel Dzong which was built in the year 1646 by Zhabdrung Ngawang Namgyel to commemorate his victory over Tibetan invasion. The dzong caught fire in the year 1951 and remain ruined. Returning back en route visit the historical Kichu Lhakhang, which is one of the 108 temple built by Tibetan king Songtsen Gyelpo in seventh century to subdue the giant ogress that lie down across the whole of Himalaya. Take the route down to Paro.