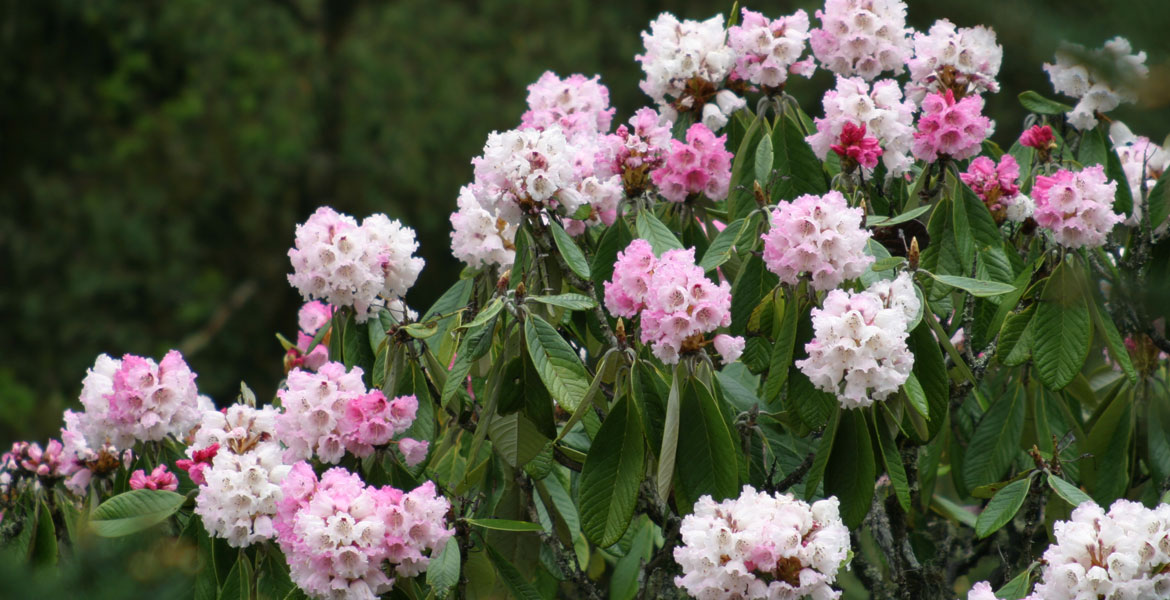 On this tour, you will be seeing the pleasant sighs of the wild and domestic followers in abundance and appreciate seeing wide array of its natural plants with blossom flowers. Moreover, on this tour you will get a chance to experience the festival celebration of the rhododendron flower held in Lamperi Botanical Garden. The festival displays different species of rhododendron flower that are in full bloom in their natural habitat. Of the 46 different rhododendron species recorded in the country, 29 species are found in Lamperi Botanical Park. The festival also features garden walk along with several local culture and cuisine, arts and crafts, traditional games, cultural program, guided walk and other activities.

Arrival at Paro international airport you will be met by our local tour guide and driver and transferred to you hotel. After a short break, you will be led for your half-day cultural sightseeing in enchanting Paro valley. Paro valley is truly enchanting surrounded by lush green rice fields with clear crystalline river meandering graciously through the valley. The countryside is also dotted with elegant farmhouses and golden roofed monasteries dotted throughout the hillside. Your sightseeing in Paro includes a visit to the impressive Paro Rinpung Dzong, built in 17th century. It is located just outside of Paro town overlooking the valley below. Today the dzong serves both as the administrative and religious sites of Paro district. Following Paro Dzong drive further uphill to visit the Ta Dzong which serves as the watch tower of Paro Dzong. It was later turned into National Museum in 1968 and serves as a repository housing collections of Bhutanese treasures and artworks. Coming back visit Dumtse Lhakhang that lies just out of town or en-route National Museum. This circular shaped temple was built by Drubthob Thongtong Gyelpo commonly known as “Iron Chain Bridge Builder” in the year 1421. Locally it is believed that the temple is literally chain down to the earth otherwise, it will fly off to heaven. It is worth making a short visit to the temple. After the temple work towards neatly arranged Paro town. In the evening hour, drive to hotel

Since your first day has been steeped in culture and history, it is now time to take a break and indulge your visual senses with some natural beauty and botanical photo trip. It is about 40km to the top, the pass lies at a cool crisp of 12,200ft/3720m, and the road takes you through rich forest of rhododendron, fir, juniper and pine. Many of the wild flower adds a dainty touch to the valleys as their pink, white and blue blossoms adds a new sense of wonders for botanical photographer. Some of the flower growth includes gentiana phyllocalyx, gentian veitchiorum, lomatogonium brachyantherum, taraxacum officinale, primula denticulate, primula uniflora, primula primulina, oxygraphis endlicher, cynanathus lobatus, saussurea obvallata, swertia multicaulis, fragaria nubicola, rhododendron hodgsonii etc. If the weather is clear, you can also have a breathtaking view of Jomolhari and other Himalayan giants. After the pass the other side valley leads to Haa taking you all the way downhill through rich forest of pine, fir, juniper and rhododendron bush. At your arrival in Haa drive straight to your hotel and check-in.

In the morning before you depart to Thimphu, explore some of the interesting natural and historical attractions of Haa. The region is blessed by the presence of Meri Puensum, the three small mountains symbolizing Rigsum Gonpo, namely Jampelyang (manjushri), Chana Dorji (Vajrapani) and Chenrezi (Avaloketeshvara). The region is also marked as one of the highest district headquarters in Bhutan. More importantly visit the following historical places including Lhakhang Karpo (White Temple). This historical temple houses the district monastic body of Haa. According to legend the rays of light once emanated from the body of Songtsen Gampo, the dharma king of Tibet, and the temple was built on the site where the white rays of the light had fallen. Climbing further uphill for 10 minutes takes you to Lhakhang Nagpo (Black Temple). It was believed that the temple was built where the black rays of light had fallen. Coming back to the road, drive straight to Thimphu. Your drive takes you through stunning landscape with beautiful and scattered settlements.

The bustiling capital Thimphu (7700ft/2350m) lies in a steep valley, with alpine forest with numerous golden topped monasteries and temples scattered throughout the hillside. Thimphu is home to the Royal Family, the Royal Government and to several foreign missions and developments. The region offers many sites of interesting places including the National Memorial Chorten built in 1974. The complex is visited by thousands of people throughout the day and is one of the most visited sites in Thimphu located in the heart of the Thimphu town. Your next stop of the day is the Kuenselphodrang (Buddha Point). The drive takes you ascent for 10 minutes to the top, offers the giant statue of Buddha Dordenma which heights 169ft, and is the world’s tallest Buddha statue. From the top one can have a clear view of Thimphu city and the surrounding mountains. Returning back, drive to visit the Institute of Zorig Chusum. It offers a six years course for students to learn the 13 traditional Arts and Crafts. A short walk down takes you to National Library. It was opened in 1967 to preserve the ancient Bhutanese texts and act as a repository for thousands of old religious books and manuscripts as well as the wooden blocks used for printing.

After lunch driver further five miles from Thimphu to visit the historical Semtokha Dzong, lies on a lofty ridge stands guarding the main Thimphu city. It was built in 1629 and was the first dzong in Bhutan built by Zhabdrung Ngawang Namgyel. Coming back if you are here in Thimphu during the weekends, visit the Centenary Farmer’s Market that lies on the bank of Wang Chhu. The market opens every Friday, Saturday and Sunday. Villagers from the valley and other parts of the country come to sell their local agricultural products. Your last stop of the day is Tashicho Dzong the ‘fortress of the glorious religion’. A visit to the dzong is permitted only after 5pm or after the office hour. The dzong house the throne room of His Majesty the king, government offices and the central monks. Retuning back from the dzong you are given free time to stroll around the downtown of Thimphu city.

On day 06 after the festival in the evening hour you will be transferred to Punakha. Overnight in hotel Punakha

Punakha is inexplicably linked to some of the most momentous events in Bhutanese history; the valley deserves its reputation as one of the most beautiful and significant region at the heart of Bhutanese culture. It was in Punakha where Zhabdrung Ngawang Namgyel first established the Chhoesid Nyiden, the dual system of government in 1651. Punakha is also the place where the first king of Bhutan was elected and crowned as the first king of Bhutan in 1907. The first section of the National Assembly was also held in Punakha in 1955. Today Punakha remained as the most significant region and it still serves as the winter capital of the monastic body headed by Je Khenpo (Chief Abbot). Punakha boast several ancient and historical temples and monasteries and some constitutes the most significant spiritual treasures of the Kingdom.

After your morning breakfast, hotel check out and drive to Paro. Driving distance: 4 hours

Your day begins with a hike to the magnificent Taktsang Monastery that lies at 3140 meters. Perched Cliffside, it is believe that this is the meditation sites of Guru Rinpoche whom flew on the back of a tigress in the 8th century. An important Buddhist pilgrimage sites in the Himalayas. With its stunning vistas and spectacular architecture against a backdrop of sheer granite cliff faces. Descending from Taktsang, stop at the cafeteria for lunch. Follow the same trail downhill till you reach the parking lot. Drive out to the northern end of the valley to visit the ruin 17th century Drukgyel Dzong. With its backdrop view of the great Jomolhari peak, this dzong was originally constructed to commemorate victory over the Tibetan army. On your way, back stop to visit the historical Kyechu Lhakhang. Coming down drive straight to Paro and stroll around the town.