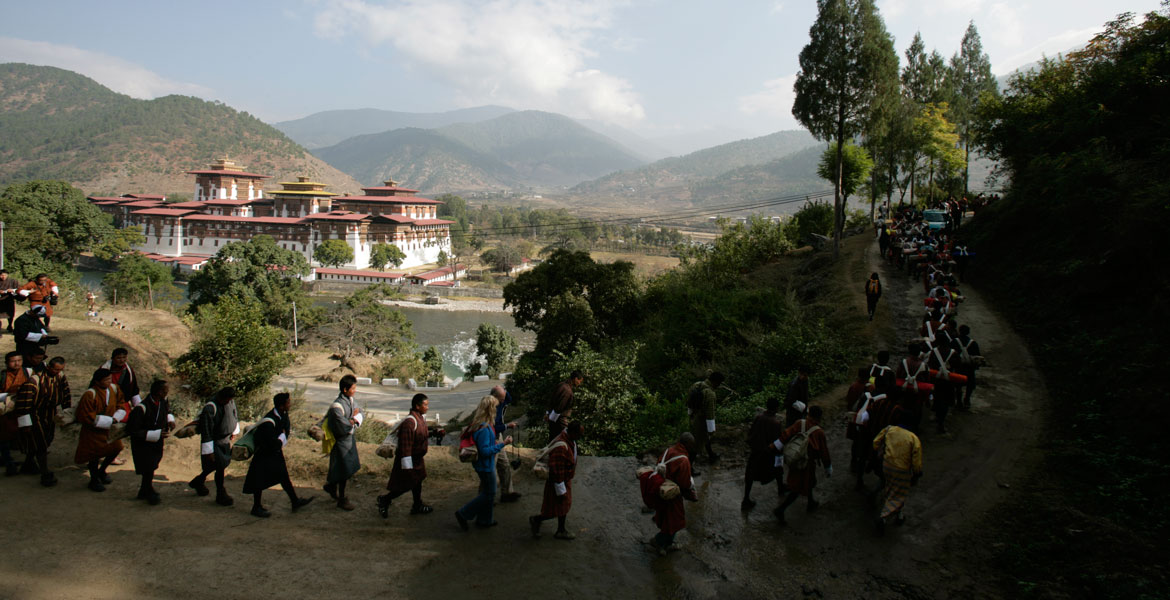 Enrich your yoga practice with historical Punakha Tshechu (Festival). Mix this ingredient together any way you want to make your Bhutan tour more charming. This tour offers yoga practice in the magical setting of the kingdom, where you can unwind, relax and come into a more integrated relationship with yourself and your world. Combine with your every morning and evening yoga with day program showering with extensive local knowledge. Punakha Tshechu (Festival) offers a dramatic recreational scene from the 17th century battle with Tibet. The festival not only plays the important role in preserving Bhutan’s rich culture and traditions.

Arrival in Paro International Air port. Meet with our local tour guide. After a brief introduction drive to the town for your arrival refreshment and then to the Hotel for check in. After finished enjoying your lunch drive to Dzongdra Ney taking the Haa Highway from Wuchu School till a ridge and then go via side road which goes to the left. This site is considered as the supreme sacred place of Ugyen Rinpoche. Moreover, it is a sacred place where Drubthop Gonpo Dorji discovered treasures of a crystal stupa and a relic of Nenyingpa Buddha. Coming back from there visit the Giant Fortress of Paro which overlooks the Paro valley. Crossing the bridge over Paro chhu walk up to the Dzong. This Dzong has got a long history dated back from 8th century, but the present Dzong has its history when the descendent of Hungrel Lama offered the Dzong to Zhabdrung Ngawang Namgyel in the seventeenth century. The Zhabdrung expanded the Dzong in 1644 and established it as the administrative and monastic centre of the western region. Today Rinpung Dzong houses the administrative offices of Paro District and the District Monastic Body.

Enjoy your buffet  breakfast in the Hotel and then check out. Drive to Thimphu the only capital city of Bhutan. This affluent and vibrant province has been a home to the Royal families and government ministries for more than six decades. Thimphu, the city of happening also serves as the cultural hub for ten and thousands of foreigners and locals. Well preserved cultural heritages, serene environment and easy accessibility of modern amenities are peculiarities that sets Thimphu apart from rest of the provinces in Bhutan. Before getting inside the city, visit Simtokha Dzong. This was the first of the Dzong built by Zhabdrung in 1629. After lunch visit the Memorial Choten, built by the Government of Bhutan with the wishes of Ashi Phuntsho Choden the wife of the second King in memory of her son, The Third King of Bhutan in the year 1973. Drive to Changangkha Lhakhang, which is considered to be the oldest temple in Thimphu dated back to 15th century. In the evening visit Trashi-Choe Dzong “ The Fortress of Auspicious Religion” . Its history dated back to the 13th century, but the present incarnation was consecrated as late as 1968 and this building is a visual delight and carries a aura of regal dignity. 06:00 am – 06:30am Morning Yoga, 06:00pm – 07:00pm Evening Yoga Class

Thimphu alone has got many interesting and important places to visit. Today, after your breakfast, drive further north of Thimphu and hike to Tango or Cheri Gompa which both the monasteries played an important role dating from the 12th century. Cheri is considered as the sacred place of Yeshe Gonpo, the great Protective Deity. It is also like the life-tree of the Palden Drukpa. Therefore, Cheri has been revered by the former rulers and doctrine holders. Tango Gompa, is not only a sacred place of the spontaneously- arisen Vira Hayagriva, but it is also a supreme sacred places visited and blessed by Ugyen Rinpoche. Returning from there, drive to Sangay Gang which is at 8807ft, which provides a vantage point for brilliant clear view of the city. Heading back, make a short visit to the mini-zoo which is now a large outdoor enclosure that holds one of the strangest loking creature you are likely to see- the Takin “The National Animal of Bhutan.” 06:00am – 06:00am Morning Yoga, 06:00pm – 07:00pm Evening Yoga Class

After your early breakfast in the hotel, check out. Drive to Punakha via Dochu La Pass, which offers you the breathtaking view of the mighty Himalayan range. The Pass also has got 108 stupas that commemorated the victory of His Majesty and arm services over insurgents who intruded into the country. From here the drive is all downhill and reaching Lobesa, hike to Chime Lhakhang built by Drubchen Ngawang Chogyel in the fifteenth century.

After your breakfast, drive to Punakha to witness the grand colorful winter festival. This unique dramatic recreation festival is the scene from the 17th century battle with Tibetan army. Zhabdrung Ngawang namgyel led the Bhutanese to victory over the Tibetan and to commemorate the triumph, he introduced Punakha Drubchen. 06:00am – 06:30am Morning Yoga, 06:00pm – 07:00pm Evening Yoga Class

In the morning after breakfast, drive to Nalandra Buddhist Institute, which was founded by Gyelwa Shakya Rinchen. It was  called Nalandra because Gyalwa Shakya Rinchen had a clear vision of the clarifiers of the teaching of Buddha known as the Six Ornaments and the Two Supreme Ones of India, conducting religious discussions at this place. After lunch drive to Punakha Dzong for the festival program.  06:00am -06:30am Morning Yoga, 06:00pm – 07:00pm Evening Yoga Class

This morning visit Wangduephodrang to explore this bustling market town and visit Wangduephodrang Dzong. Built in 1639 the strategically located Dzong is perched on a spur at the confluence of two rivers. Afterwards drive up a winding mountain road through oak and rhododendron forests, and over a high pass down into the wide and picturesque Phobjikha valley. Phobjikha is one of Bhutan’s few glacial valleys, and chosen winter home of black necked cranes (November – March) migrating from the Tibetan plateau. The valley is one of the most beautiful in Bhutan. Visit Gangtey Goempa (Monastery), the only Nyingmapa monastery in western Bhutan and explore Phobjika Valley with time to view the Black-Necked Cranes. These great birds, beloved in Bhutan and known as Trung Trung, feed along the marshy Phobijikha valley bottomlands. There are said to be only 1600 of the birds in the world, of which about 400-500 come to Bhutan in November and stay until March. The beauty of the Cranes has given rise to many Myths, legends, Folktales and songs. 06:00am -06:30am Morning Yoga, 06:00pm – 07:00pm Evening Yoga Class

Drive to Trongsa (4 hrs) over Pele La pass (3,420m) on the Black Mountain range. Visit the beautiful Chendebji Chorten en route. It is built in a style unusual for Bhutan, with painted eyes facing the four directions. The Chorten was erected in the 18th century by a Tibetan lama to cover the remains of an evil spirit that was subdued at this spot. The imposing Trongsa Dzong can be viewed across a deep canyon to signal your approach to the town around a curving road. Trongsa is the ancestral home of Bhutan’s ruling dynasty. After lunch, visit Trongsa Dzong, a masterpiece of Bhutanese architecture. Trongsa is the largest Dzong in Bhutan and the location of where the institution of monarchy in Bhutan began. The foundations of Trongsa Dzong were laid in the 16th Century and there are now 22 temples in the complex. The view from the Dzong is spectacular and one can see across the impressive landscape for many miles. Also visit the Ta Dzong museum housing an incredible collection of historical artefacts of the Royal Family and a range of traditional armour. Continue driving towards Bumthang (2.5 hrs), one the most spectacular valleys in Bhutan and also the spiritual and historical heartland of the country. The road winds steeply up to Yo Yutung La Pass (3,400m) before descending down through dense coniferous forest to Chummey valley. Enjoy a visit to the Chummey weavers’ workshop (at the beginning of the only straight road in Bhutan!). Here you can see example of Bumthang’s noted textiles. Some of the most popular are Mathra, deep wine and dark green plaid fine wool, nowadays made into colorful scarves, bags, blankets and sweaters. Bumthang is home to some of Bhutan’s oldest Palaces, Buddhist temples and monasteries. The valley’s barley fields, apple groves and meadows lay below huge hills which climb up towards the Himalayan mountain wall separating Bhutan from Tibet. The beautiful architecture unique to Bhutan is evident in the many large farmhouses and temples. Bumthang is associated with Guru Rimpoche (Padmasambhava) and with Terton Pemalingpa. 06:00am – 06:30am Morning Yoga, 06:00pm – 07:00pm Evening Yoga Class

Enjoy a day exploring some of the incredible sites of Bumthang, including Jakar Dzong (Dzong of the white Bird) and Tamshing Lhakhang, founded in 1501 by Terton Pemalingpa (founder of the Nyingmapa sect) and containing interesting and ancient Buddhist wall paintings. Pemalingpa’s heavy coat of nails is kept in the Vestibule and people are permitted to try it on. It is said that if they can walk around the inner sanctuary three times while wearing it, some of their sins will be forgiven. Also visit Kurjey Lhakhang, one of the most sacred places in the kingdom where Bhutan’s patron saint Guru Rimpoche meditated and Jambay Lhakhang, erected by the Tibetan king Songtsen Gampo in the 7th century. It dates back to the origins of Buddhism in Bhutan and is one of the Kingdoms oldest temples. 06:00am – 06:30am Morning Yoga, 06:00pm – 07:00pm Evening Yoga Class

After breakfast hike to Taktsang Monastery. The trail is broad and the walk of approximately 2 hours uphill takes you almost a kilometre above the Paro valley floor (for those who cannot hike we will arrange a horse for transfer up to the viewing point). The view of Taktsang Monastery built on a sheer cliff face 900 metres above the valley floor is a spectacular sight. The Monastery is also an important pilgrim site for the Buddhists. The great Guru Rimpoche is said to have flown here on the back of a tigress when he brought the teachings of the Buddhist Dharma to Bhutan in the 8th Century. He then mediated in a cave there for three months where the monastery was later built. Nearby there is a teahouse where you can stop for refreshments. In the afternoon, drive to the ruins of the 17th Century Drukgyel Dzong, an historic monument built by the Shabdrung to commemorate his victory against invading Tibetans in 1644. In fine weather, the towering peak of the sacred Mount Jomolhari (7314m) appears as a stunning backdrop. On the return drive to Paro, visit 7th Century Kyichu Lhakhang, one of the 108 temples constructed by the Tibetan king Songtsen Gampo. 06:00am – 06:30am Morning Yoga, 06:00pm – 07:00pm Evening Yoga Class