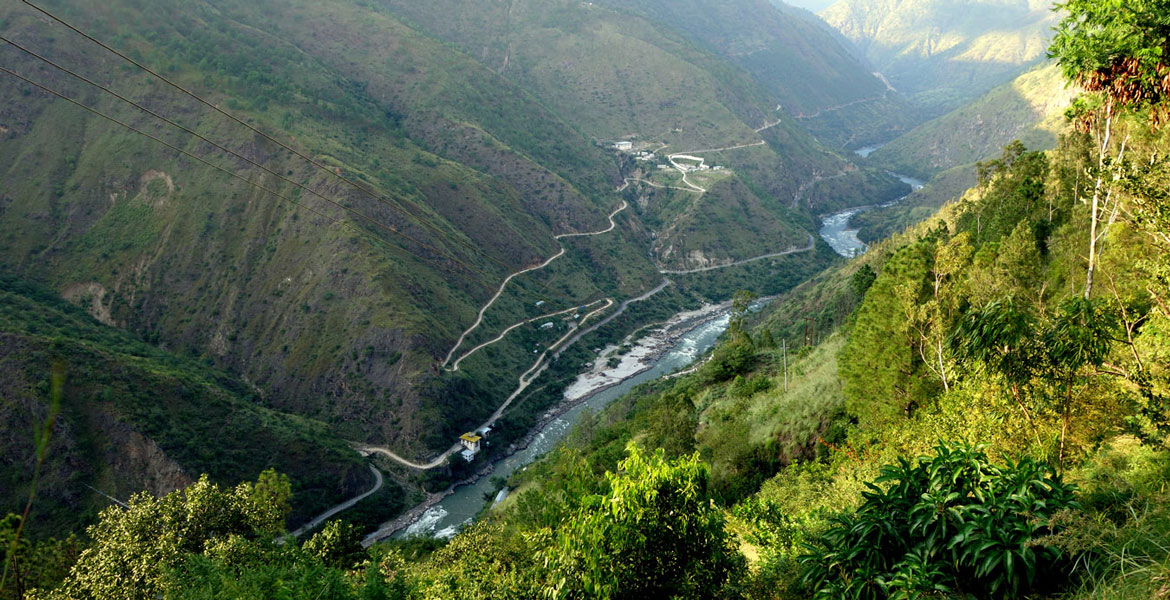 Drive into the heart and soul of the kingdom with our Khoma Textile Ride. Our adventure motorcycle ride takes you one-step deeper into the Bhutan, where few tourist go. This 13 days motorcycle journey presents and experience of the dramatic landscape, unique culture and unsurpassed beauty. This tour takes you to the remotest Lhuentse valley in the eastern Bhutan, which is famed for its colorful Bhutanese textile. It offers an opportunity to explore and experience various kind of textile weaving and dying which have reached the new heights of dynamism and respect in Bhutan.

Whether flying along the Himalayan range from Kathmandu or over the foothills from Kolkatta, the journey offers fascinating views and an exciting descent into the Kingdom. After immigration formalities and baggage collection, you will be met by our representative, and then taken to your hotel. Afternoon we suggest you making a ride to Chele La Pass (12,200ft/3720m), which is only 40km. The pass lies at a cool crisp and takes you through a spectacular lovely forest of pine, oak and rhododendrons that are ablaze in the months of April and May. En-route you can also make a short visit to Kela Dechen Yangtse Anim Dratshang (Nunnery) perched on the opposite cliff side. If you are there on a clear day the view of the Mt. Jomolhari and other giants are at your site. Return down the valley through following the same road and ride to your hotel.

Today after your morning breakfast you will be led by our biking tour guide and ride to Thimphu. The trail takes you through the main expressway until you reach the capital city of Thimphu. Your ride is mostly through plane road and with gentle slope after crossing the confluence of Pa Cuuh River and Wang Chhu River taking you through terrace of rice fields and lovely stands of conifer forest. The pleasant ride takes you through the countryside dotted with elegant farmhouses and traditional homes that are considered the most beautiful in the country. The ride to Thimphu takes around 2-3 hr and is only 55km. Having entered Thimphu, ride straight to your hotel and check in. After lunch, you will be using the vehicle for your sightseeing program in Thimphu.

Take an early evening stroll around the market area before dinner.

Today you will be transferred by road eastwards to the Phobjikha Valley via the town of Wangdue. Continue ascending to Dochu-La (pass) to view the 108 Stupas which were commissioned by a former Queen as a memorial to those wo lost their lives during the low intensity conflict in late 2003 when Bhutan evicted Indian rebels camped in the jungle o the Bhutan Eastern Himalaya and depending on the time of the year the vista can vary from alpine snow (November – March) to a profusion of blossoms (March – May) splashed among the sort green of the wild herbs and forest trees. While in lower valley of Wangdue , pay your visit to thr ruined Wangdue Phodrang Dzong.  Reaching Phobjikha Valley check in to the hotel and in the evening stroll around the valley

Today you have a long journey. It takes around 150km and en-route you will be stopping to visit some of the historical figure and interesting sites. In the morning after the breakfast, you will be riding to Pele La Pass (11070ft/3375m), which is marked by a small chorten surrounded by beautiful Buddhist prayer flags. From the lofty pass the black mountain region the road descend downhill passing through dwarf bamboo, yak pasture and through groove of fir trees to the evergreen and then finally through the broad-leaved forest. Continue your ride until you reach Trongsa (6800ft/2073m. En-route stops at Chendebji Chorten for lunch. After lunch, your ride takes you through broad-leaved forest with scenic landscape through gentle plain road and less traffic. From Trongs the road steeply climbs above the Trongsa town and we suggest driving rather than biking. The gradual climb takes you to Yotong La Pass at 11000ft/3354m and takes around 26km. From the pass, you can choose to ride your bike until you reach Chamkhar valley to your today’s destination. We would like to suggest you reaching your destination before dark.

If time permits, drive further east of Bumthang to visit the Membar Tsho ‘the burning lake’. In the evening, stroll around Jakar town.

Today is a full day drive to Mongar. Enjoy views and scenic stops along the way. Picnic lunch at a scenic spot en route to Mongar. After lunch, we will visit Mongar Dzong, built in the 1930s and one of Bhutan’s newest dzongs, but constructed in the same way as all previous dzongs, without either plans or the use of nails.

Morning drive to Lhuentse which is one of the most rural and isolated districts in Bhutan. The landscape is spectacular with stark cliffs and gorges, beautiful conifer and pine forests, and remote villages with rice, millet and corn fields. Kurtoe region of Lhuentse is the ancestral home of Bhutan’s Royal family. In the evening stroll around market before dinner.

Enjoy a walk from Khurbazam to Khoma Village (around 2 hours over clear flat paths), where some of the most famous and expensive textiles are woven in silk and cotton. Khoma village is famous for distinctive ‘Kishuthara’ weaving and it is the main income source of the villagers. Kishuthara is a silk on silk weaving technique with intricate hand laced patterns. It is the most expensive textile in Bhutan and highly sought after by collectors. It is a full day excursion where you can see the technique of weaving from local villagers and as well as a good opportunity to interview and try your hand at weaving. The other famous weaving area is Gonpa Karpo (four hours walk from the bridge), a remote village clustered around a sacred monastery. The weavers of this village feel that their weaving is superior because of the special blessing from the deities of this sacred site.

Retrace back your journey to Bumthang. En route take a number of breaks for refreshment and picnic lunch and enjoy the scenic beauty of Thrumshingla National Park.

Continuing toward the west, we drive from Bumthang to Thimphu. Lunch would be served en route at one of the famous restaurant in Trongsa town. Enroute at Wangduephodrang take a short break for tea / coffee and then proceed to Thimphu. On arrival at Thimphu, check into the hotel.

After breakfast, drive to Paro and visit

After breakfast, take an excursion to Taktsang Monastery, which is Bhutan’s most famous monastery. A legend says that Guru Padsambhava came here flying on the back of tigress and meditated at the place where now monastery stands. Taktsang or Tiger Nest was severely damaged by fire, which took place in April 1998, and now it has been restored in its original splendor. In the evening, visit Kyichu temple built by King Tsongchen Gyampo in 7th century. This is one of the oldest temples in the country.

Day 13: Board your Flight Back Home