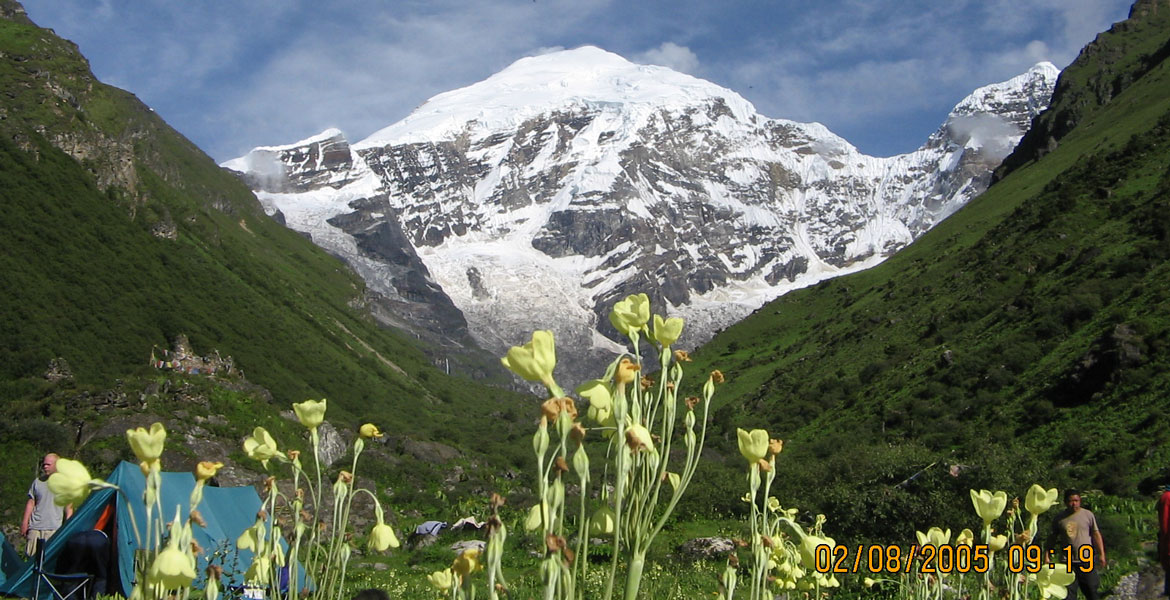 The Jomolhari Botanical Photo Safari Trek takes you from 2,600m up to 5,224m. This botanical photo trek starts from the Drukgyel Dzong at the head of Paro valley taking you to Lingshi, up to 16,236ft/4950m and ends up close to Thimphu. With one day halt at Jangothang the botanical trek is blessed with a wealth of rich diversity of wildflowers that are ablaze in its natural beauty. From the mountain side to the alpine pasture the valley is carpeted with wealth of wildflowers. This excellent and challenging trek also offers a stunning view of the snow capped mountain peaks of Bhutan including Jomolhari, Jichu Drakey, and Tsherimgang etc.

On your arrival at Paro airport you will be met by our local tour guide and driver and then transfer you to your hotel. Rest day at leisure.

We suggest you to make an early start since the hike to the famous Tiger’s Nest is quite an uphill task and takes around 3-4 hours walk at an average speed. To get to the starting point you will have to drive for 8km and then turn left for 3km to reach a large parking lot decorated with several shops and prayer flags. You will climb through beautiful pine forest with an occasional grove of fluttering prayer flags. According to legend Guru Padmasambhava came to Taktsang in the eight century, flying from the east of the country on the back of the tigress (a form that one of his consorts is believed to have taken). He meditated in the cave for three months donning his terrifying form of Dorji Droloe subjugating the evil spirits. Druk Desi Tenzin Rabgyel built the primary temple around Guru Padmasambhava’s meditation cave in 1684. This incredible monastery clings to the edge of a sheer rock cliff that plunges 900 meters above the valley below. Returning if time permits visit Ta Dzong the watchtower built in 1659, which now houses the National Museum. Below the museum is the Rinpung Dzong literally known as “fortress on the heap of jewesl.” It houses the centre of civil and religious authority of Paro district and was built by Zhabdrung Ngawang Namgyel in 1646.

The trek starts from Gunitsawa village at the head of Paro valley and takes you on a gently ascent of around 750m punctuated by many sharp, short descents. In some places, the trail takes you close to the river while other sections have to negotiate rocks as the trail climbs through oaks and rhododendrons and then through rich forest of birch and fir till you reach Sharna Zampa. En-route you will encounter different variety of rhododendron including rhododendron triflorum, Rhododendron keysii, Rhododendron arboreum, Rhododendron setosum, and Rhododendron wallichii etc.

Today you have a long day and the trail continues through with lots of small ascents and descends. The trail takes you through rich forest of fir and birch and passing through the river valley the trail gradually narrows to a mere path, which descends to a meadow where you will camp for then night. If the weather is clear, the first glimpse of Mt. Jomolhari can be seen looming at the valley head. En-route you will encounter several wildflowers that are ablaze in red and pink bloom including Rhododendron triflorum, Rhododendron setosum, Rhododendron keysii, Frangaria nubicola, Chusua pauciflora, Anaphalis contorta etc.

We suggest you to make an early wake up since there is a great chance of seeing the towering peak of the Jomolhari bathing in its early sunrise. The trek continues following the Paro Chu valley, which slowly widens into patches of alpine meadow and scanty growth of the forest. After passing the army check point the trail widens into a wide valley offering a spectacular view of the surrounding mountain ridges and snow capped mountain peaks with yaks and yak herder’s camps, which is the regular feature of the trail. The mountain slopes and the surrounding meadow are carpeted with variety of wildflowers including Gentiana phyllocalyx, Gentiana veitchiorum, Saussurea sughoo, Lomatogonium brachyantherum, Acanthocalyx nepalensis, Aster himalaicus and Taraxacum officinale etc.

The rest day acclimatizing at Jangothang provides the magnificent views of Jomolhari and Jichu Drakey. The rest day provides several half-day hikes with great views of the lakes and snow capped mountain peaks. You will also have a great chance to spot some blue sheep on the slopes. If you have obtained a fishing license, you could even choose to go for fishing at the high altitude lakes. You will spot some of the flowers like Rhododendron triflorum, Rhododendron setosum, Rheum nobile, anaphalis contorta, Anaphalis xylorhiza, Swertia multicaulis, Saussurea roylei, Saussurea obvallata etc.

Today you have an arduous and tiring, as you have to cross Yelila pass at 16,236ft/4950m and descent to Shodu. From the pass of the weather is clear you will have a panoramic view of several snow capped mountain peaks including Jomolhari, Juchu Drakey, Tsherimgang and Masagang. En-route you will encounter several wildflowers including Saussurea roylei, Swertia multicaulis, Cynoglossum furcatum, Chusua pauciflora, Rheum nobile and Fragaria nubicola etc.

After your leisurely breakfast in the hotel, you will be taken for your day sightseeing in Thimphu and in the evening drive to Paro for your night halt. Your sightseeing in Thimphu includes a visit to Simtokha Dzong, originally called as Sinmo Dokha (demon on the stone). This was the first Dzong built by Zhabdrung Ngawang Namgyel in 1629 and renamed it Sangay Zabdon Phodrang (the Palace of the profound tantric teaching). After the dzong return to Thimphu and visit, the National Memorial Chorten built in 1974. His mother Ashi Phuntsho Choden Wangchuk built it in the memory of the third King Jigme Dorji Wangchuk. Kuenselphodrang (Buddha Point), the Buddha Dordenma Statue that is 169ft is the world’s tallest Buddha statue and it is located about 6km drive from Thimphu city. Returning back visit the National Institute of Zorig Chusum, this offers a six-year course for students to learn the 13 traditional Arts and Crafts. A short walk from here leads you to National Library. This was open in 1967 to preserve the ancient Dzongkha texts and acts as a repository for thousands of old religious books and manuscripts as well as the wooden block used for printing. Return to Thimphu for lunch and after lunch stroll around the city town for shopping and buying gifts. In the late evening, drive to Paro, which is 65km and can be negotiable within one hour.

We suggest you making an early start since the hike to Taktsang is quite an uphill task and takes around 3-4 hours. The Taktsang or Tiger’s Nest Monastery, clings preciously to a cliff of 3,000ft above Paro valley. Legend has it that in the eight century Guru Padmasambhava came to Taktsang in the eight century, flying from the east of the country on the back of the tigress (a form that one of his consorts is believed to have taken). He meditated in the cave for three months and then donning his terrifying form of Dorji Droloe subjugating the evil spirit. Centuries later, in 1684, the 4th temporal ruler of Bhutan, Gyelsi Tenzin Rabgyel, built a monastery on the site and gave it a name Taktsang, as a reminder of its origins in the Padmasambhava legends. Returning back drive to visit the National Museum, located on the hill above Paro Dzong. It is a 17th century watchtower now houses the national museum of Bhutan. It was open in 1968, and is the repository of Bhutanese history containing fine arts, paintings, textiles, jewelry, and historical sections as well as gallery of stuffed animals and butterflies from Bhutan. After the museum if time permits visit the Paro Rinpung Dzong or drive down to the Paro town for your last day shopping and buying gifts for your friends and family.

A sensational take off