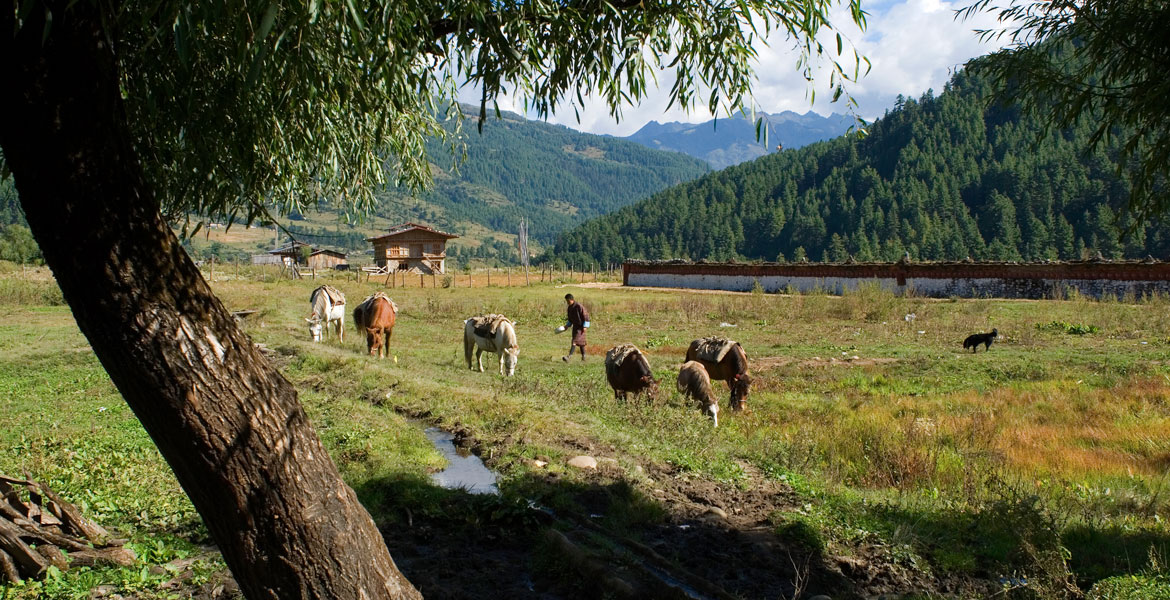 Bumthang Tang Valley Trek  with Home Stay Tour is one of the excellent three days introductory treks in Bumthang. The trail offers beautiful scenery, impressive landscape, scattered rural village, remote and isolated monasteries with mountain passes dotted with beautiful prayer flags. More interestingly, the wide and scenic valley of Bumthang is home to some of the Kingdom’s most ancient and precious Buddhist sites and located in the central heart of the country and is one of the most visited and attractive destination for travelers with highest consecration of ancient historical temples and monasteries.

Today at your arrival, you will be welcomed by our local representative at the Paro International Airport and after a short introduction you will be driven to Thimphu the capital city which lies at an altitude of 7700ft/2350m is only 55 Km long and is negotiable in 1.5 hours. The capital of Thimphu is home for more that 80,000 population and you will soon notice that it is unlike most capital cities of the world. The capital lies in a steep valley with alpine forest and numerous golden roofed temples and monasteries and the capital possess the real charm. Reaching your hotel check in and after a short rest in the hotel drive to visit the impressive Memorial Chorten(stupa) built in memory of the third king of Bhutan in 1974. This stupa is visited by people from all walks of lives and is one of the most public religious place in the country. From here take the road to Changangkha Lhakhang which is considered to be one of the oldest temple in Thimphu and was built in twelve century. Located above the city the place has an air of peace and tranquility. From the temple drive to visit the Trashichhoe Dzong, which is your last stop of the day and usually open to the visitors after five pm in the evening. This giant impressive fortress is locally known as the “fortress of the glorious religion”. It houses the throne room of the king and the central monk body.

Your drive to Punakha takes around three hours leading you through some of the panoramic landscape and scenery. The region of Punakha lies at an altitude of 1,300m and served as the old capital of Bhutan until 1955. Today it serves as the winter capital of the monastic body and has a temperate climate with rich fertile valley fed by Pho Chhu(Male River) and Mo Chhu(Female River). Your drive to Punakha takes you via Dochu La Pass, which lies at an altitude of 10150ft/3100m and takes a short 45 minutes/22km with many twist and turn. The top of the pass is one of the most finest and beautiful pass surrounded by one hundred and eight stupas built by the elder Queen Mother Her Majesty Ashi Dorji Wangmo Wangchuk in 2004. If the weather is clear the pass offers you with a beautiful panoramic view of the great Himalayan Mountain peaks like – Mt. Masagang(235012/7165m),Mt. Tsendengang(23288ft/7100m), Mt. Terigang(23944ft/7300m), Mt. Gangkar Puensum(24735ft/7541m) and many more. From the pass your drive to Punakha is all downhill through twist and turns passing various settlements on different landscape and finally drops down to Punakha at an altitude of 4430ft/1351m. Your sightseeing in Punakha includes a visit to Punakha dzong locally known as the “Palace of the Great Happiness” which saddles on the confluence of two river (male and female). This massive fortress was built as far as 1637, was built by Zhabdrung Ngawang Namgyel, and was the second of the mightiest dzong built by him. This dzong served as the seat of the governmence beginning from the Zhabdrungs time till the end of second king’s reign. Optional and interesting hiking trails available in Punakha like – Khamsum Yulley Namgyal Chorten Hike, Chorten Ningpo Shedra Hike, Chhemi Lhakhang Hike and Talo Nubding Hike. Discuss with your guide and choose any of the hike that fit your fancy.

Your fascinating drive to Bumthang the central and historical heartland of Bhutan takes you through interlocking valleys and mountain passes which is the all time beauty. The drive takes you through mixed forest, changing altitude, serpentine roads with diverse sight and sound. As your drive continues, you will pass through traditional agrarian village and people leaving between Trongsa and Wangdue still practice seasonal migration. Reaching Trongsa, if time permits make a short visit to the historical Trongsa Dzong which lies on the ridge below the small town of Trongsa. Since from the inception of monarchy until present, Trongsa is a place where the attempt of unifying the country were launched and has been a significant seat of successive monarchs of Bhutan till today. Having taken in the sights of Trongsa the road leads you to Bumthang crossing Yotong La Pass at an altitude of 8850ft/3354m and Keki La Pass at 2835m. Your destination Jakar lies at an altitude of a cool 8450ft/2576m, which is only 9 km from Keki La. Reaching your hotel the rest day is at your leisure.

This beautiful countryside of Bumthang the spiritual heartland of Bhutan offers an endless opportunity to experience and explore the cultural and religious diversity of Bhutan. Your morning visit to the permanent historical Jambay Lhakhang which supposedly constructed on the same day as Kyichu Ljhakhang in Paro. It was one among the one hundred and eight temple by the Tibetan King Songtsen Gyampo in 7th Century and this temple was built on the left knee of the ogress. The other permanent attraction is the Kurje Lhakhang, which is another ten minutes drive from Jambay Lhakhang located at the end of the main road. The Kurje Lhakhang comprises of three temple and the the complex is surrounded by one hundred and eight stupas. “Kur” means body and “Jey” means print. Legend says that when Guru Rinpoche first visited the country, he meditated here I this site leaving his body imprint on the rock enshrined here. Walk up to Tamshing Lhakhang which takes only half an hour through crossing the suspension bridge over Chamkhar Chhu(river). Terton Pema Lingpa founded this temple in 1501 and he personally involved in building this temple. The local people believe that while he was building the temple he was assisted by the Khandrum(who are female celestial being). Beside the myriads of other Buddhist temples and monasteries, the legendary valley of Bumthang with it’s wide open landscape offers a unique insight to the travelers. Your other optional sight to see in Bumthang includes – Jakar Dzong overlooking the valley, Mebar Tsho(the mythical burning lake) and later stroll around the town of Jakar.

Your cultural Tang Valley Trek begins with following the route of Chamkhar Chhu, the main river that flows through the middle of the valley and is known for the trout. The trail takes you through the scenic wooden forest of pines and beautiful valleys surrounded by golden roofed temples. As you continue through the valley, you will reach Thangbi Lhakhang that offers a good spot for lunch. From here your trek enters the Ngang Yul( the land of the swan) and at the centre lies the temple of Ngang Lhakhang. This valley was once popular for the swans. Your campsite is located at an altitude of 2800.

Hiking through scenic wooden forested trails, passing traditional farmhouse and hamlets your day takes you through crossing the beautiful verdant meadows and surpassing valley view below. Your trail takes you through a bit ascent climbing up gradually to Phephe La Pass, which lies at an altitude of 3360m, and is the only highest pass on this trek route. Reaching the top enjoy the scenic landscape and from there the trail finally descent downhill passing through wooden froest trail where you will enjoy making numerous stop enjoying the natural beauty of the surrounding. The trail takes you through a broad valley you will finally land up to Tahung where you will have your camp set up, there are several possible campsites but the best we recommend with short uphill behind the village of Tahung.

Today following the Tang Chhu(river) which is also known for trout filled river your trails takes you through the Tang Rinpoche’s Monastery and pass the Member Tsho (the mythical burning lake) and finally lead you to the sixteen century Ugyen Choeling Palace which was restored in nineteenth century. Today this privately owned house has been turned into a museum depicting the life of Bhutanese nobility and serve as a retreat for those engaged in religious studies. The museum also offers all kind of traditional artifacts. After you visit to the museum, walk downhill and soon you will reach the main road where your car and driver will collect you and drive to Jakar for your night halt accommodation in the hotel.

Your journey turns back the same routes via Trongsa, just after reaching the Lawala Pass at 10800ft/3293m you will gradually descent into the glacier valley of Phobjikha Valley, which is known for the migratory Black-Necked Crane that makes the valley a winter home for the migratory bird. Rest of the day at leisure.

Today you will have an optional sightseeing and hiking program in Phobjikha. Choose any of the following hiking trails that fits your fancy.

Longtey Trail: This is one of the picturesque hike in Phobjikha. As the drive takes you to the village of Longtey and hike from there to Phobjikha takes around three to four hours. The trail takes you through small village of Longtey and yak herders camps and finally reached the ridge with beautiful valley view of Phobjikha valley and the Gangtay Gompa Monastery which is a small promontory Gompa overlooking the lush green valley that lies at an altitude of 2800m.

Gangtay Trail: This is one of the beautiful leisurely hike that takes hikers up from the Gangtay Gompa at an altitude of 2800m down through the pine trees, farmlands and beautiful settlement. The trail provides an insight in the village life and offers a great view of the valley. If you are here in the month of October until mid-March, the migrant Black-Necked Crane will be spotted.

Today your drive takes you via Wangdue and Thimphu to Paro with the glimpses of the daily life in Bhutan and finally lands in the enchanting Paro valley. Rest day at your leisure.

Your day highlight of Paro takes you to Taktshang Gompa – We recommend making an early start. This famous Tiger’s Nest lies at an altitude of 3140m, perched cliff side. It is the meditation site of Guru Rinpoche who came to Bhutan in the eight century. Today it is considered the most sacred and important Buddhist pilgrimage site in the Himalayas with its stunning vistas and spectacular architecture against a backdrop of sheer granite cliff faces.  This gentle hike for about three hours for an average walker gives you a panoramic view of the valley below. Following the trail back from the monastery you next stop includes visit to the historical Kyichu Lhakhang dated back to seventh century and is one of the oldest temple along with Jambay Lhakhang in Bumthang. Visit the Paro Rinlung Dzong towering the valley below. It was built by Zhabdrung Ngawang Namgyel in 1646 and now house both for the administration centre of the Paro district and central monastic body of Paro. A few minute drives take you to the National Museum, which used to be a Taa Dzong, which means the “watch tower” of Paro Rinpung Dzong. In the evening, visit the main town of Paro.

Day 12: A Sensational Take Off (Depart)