Eastward to Drametse for the Dance of the Drums 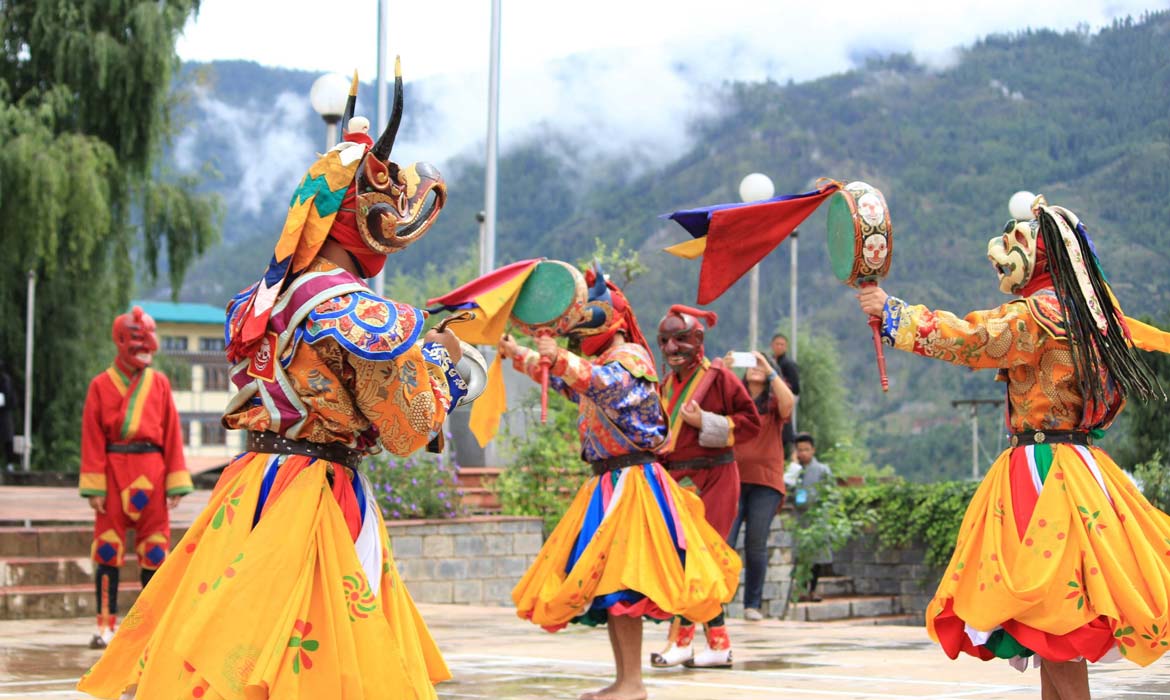 Eastern Bhutan has many dialects spoken and a very rich variation of customs subtly different from Western Bhutan.  Discover the differences that enrich Bhutanese culture.  Nested on a high plateau is the home of the impressive masked dance of the drums called the Dremitse Nga Cham.  The dance is recognized as a UNESCO cultural heritage, and performed by dancers wearing masks featuring various wildlife, who beat drums in unison.  The dance is now performed at most tsechus all over the country.

The best bits on this journey eastward

The tour begins from Mongar, where you can experience the town’s lifestyle and examine traditional textiles and fabrics.

Get to see dzongs built without any construction drawings or nails.

You must not miss this part of history at the Drametse Lhakhang, founded in the 16th century by Ani (nun) Cheten Zangmo, the granddaughter of the renowned religious master Terton Pema Lingpa (the treasure discoverer).  According to the biography of the 6th Dalai Lama, Tshangyang Gyatso (17th century), Ani Cheten Zangmo was the incarnation of a celestial woman (dakini), strongly committed to the wellbeing of all sentient beings on earth.

Witness the Drametse Ngacham, proclaimed by UNESCO as a masterpiece of the oral and intangible cultural heritage of the world, in its place of origin.

Visit Aja Ney, a sacred site, where you can receive blessings and wash away your sins.

Welcome to Lhuentse, the most isolated district in Bhutan, with stark cliffs towering above river gorges and dense coniferous forests.  This is the ancestral home of the Wangchuck Dynasty.

Go to Khoma village, for its elaborate woven cloth made of silk, called Kishuthara.  One will get to see women weaving intricate designs and patterns with traditional looms.

Get to Gangzur village, popular for women artisans with pottery skills.

Taste some history, here at the Jangchubling monastery, founded in the 18th century.  This is where the daughter of the 1st King, Ashi Wangmo, lived as a nun and transformed the sacred temple.

In Trashiyangtse a small town famous for its handmade lathed dapas and phobs (wooden containers and bowls).  Dapa-making is one of the oldest art forms in Bhutan.  There are over 100 woodcarving families in Trashiyangtse.

Visit Chorten Kora, fashioned after the Boudhanath temple in Nepal.

Get to the easternmost point of Bhutan, Trashigang, where dwell hill tribes, Merak and Sakteng people, known for their remarkable features and costumes.

See Radhi, known as the “rice bowl of the East”, home to experts in weaving natural raw silk textiles.

Lastly, visit Dewathang, where the battle of Dewanagiri (old name for Dewathang), between Bhutan and British India, was fought in 1864.  This war led to the signing of the 1865 treaty of Sinchula, which exchanged territories in Assam, Bengal and part of Dewanagiri in return for an annual subsidy from British India.

Exit at the border town of Samdrupjongkhar, gateway to the Indian state of Assam, with the oldest cinema theatre in the country.