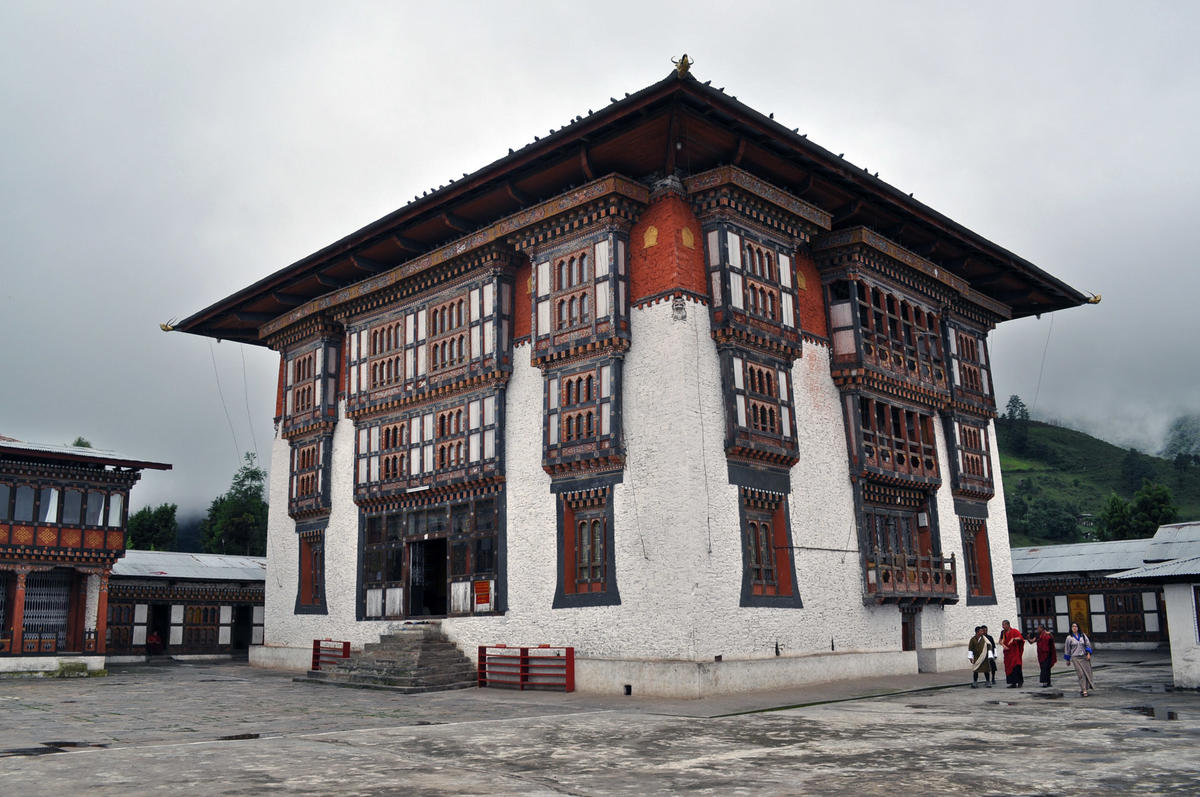 Drametse Lakhang is one of the principal spiritual centres of Peling Tradition.  It is located in Dramitse, Mongar. Drametpse literally means ‘peak without enemy’ which is a state of total freedom from the webs of conception attainable through Dzogchen teaching and practices of Peling Terchoe revealed by great master Terton Pema Lingpa (1450-1521). The monastery was founded in 1511 by Ani Chhoeten Zangmo (Yogini), the granddaughter of Terton Pema Lingpa. It is about 19 kilometres from the junction of national highway connecting Mongar and Trashigang.   Dramitse was further blessed by the birth of three successive incarnations of Zhabdrung Ngawang Namgyal: Zahbdrung Jigme Drakpa (1791-1830), Zhabdrung Jigme Norbu (1831-1861), and Zhabdrung Jigme Chogyal (1862-1904).

The monastery comprise of main chapel with the statue of Guru Rinpoche in the center, Kudung stupa of Ani Chhoeten Zangmo and statue of Pema Lingpa; In the middle floor, the chapel is dedicated to the protector deity Palden Lhamo and Tandrin (Hayagriva); and on the top floor, the chapel houses Goenkhang Chenmo (chapel of protecting dieties) with statues of three local protector deities  Pekar, Drametse and Tsong Tsoma, and  Tseringma Lhakhang (houses images of  long-life deity, as well as five versions of the Himalayan protector Tseringma).

Important relics of the monastery include Kudung (the physical remains) of Ani Chhoten Zangmo, kapala of Dakini with the self –arisen syllables OM AH HUNG. It is said that the kapala was brought to Bhutan from Samye Monastery, Tibet after it was rediscovered by Terton Pema Lingpa during one of his visit to Lhasa. It was believed to have been hidden by Guru Rinpoche and wisdom Dakini Khandro Yeshi Tshogyal after completion of construction of Samye Monastery in 769AD. It was kept in the Ten Gam (treasure box) of Tamzhing Lhuendrup Choeling until Ani Choeten Zangmo attained the age of sixteen. She received this sacred object as a share of inheritance. She fled Bumthang to Drametse to escape a proposal of marriage with the son of feudal lord known as Chokhor Deb Kunthub.  Furthermore, the temple houses a rare collection of manuscripts, thangka, important murals and religious sculptures. The monastery is known for its origin of the Drametse Nga Cham (Dance of Drums of Drametse) that features in many tsechus (festivals) throughout Bhutan and listed as a masterpiece of oral and intangible World Heritage by UNESCO in 2005. The major event of the monastery is the three day annual Kangso Chhenmo (festival of Vajra dances and rituals) held on 10th Bhutanese month. People from various gewogs, districts and tourists gather to witness the sacred treasure Vajra dances revealed by Terton Pema Lingpa. On the first day of Kangso Chhenmo, Pema Lingpa Thongdrol, the first of its kind in the world is displayed followed by 10 types of sacred dances including the famous drum dance of Drametse. On the 2nd day the thanks giving ceremonies to the tutelary deities known as Tenzug Korcham is performed followed by 7 sacred dances. On the concluding 3rd day, five different mask dances are performed and all these dances are performed according to the texts of Peling Terchoe. It is said that some of these sacred Vajra dances are displayed only in Drametse Monastery, the place of its origin.