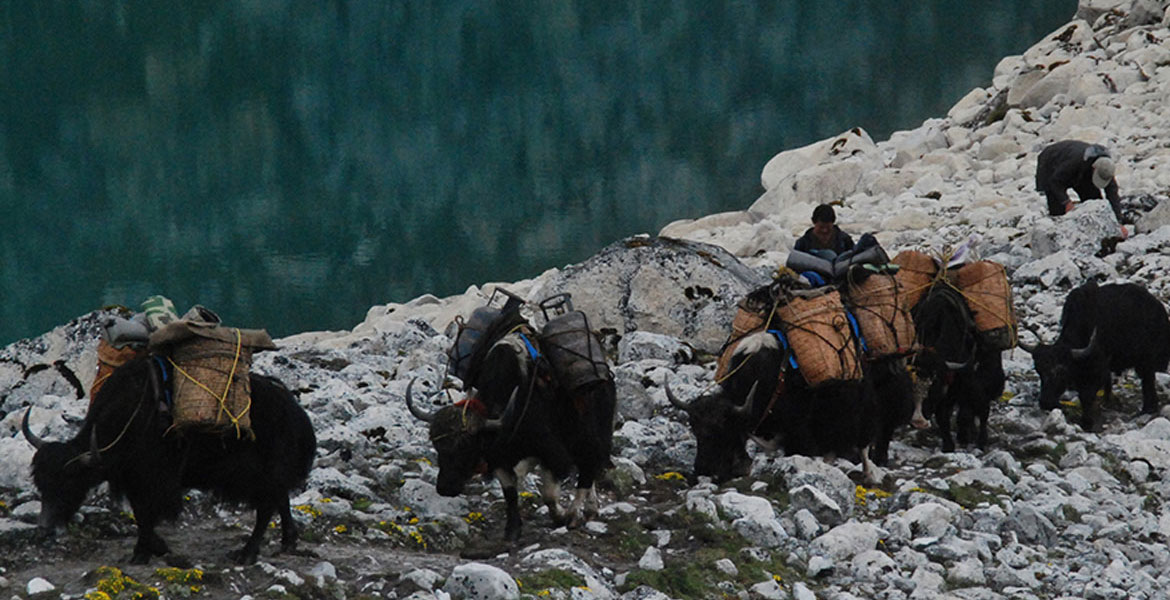 The trek despite of its difficulty it is well worth the effort as it takes trekkers through some of the most beautiful landscapes in Bhutan. The Duer Tshachu is located in the Wangchuk Centennial Park and it has seven different types of hot spring with an average temperature that varies from 38-52 degree Celsius. This unique and captivating trek begins from above Kurjey Lhakhang in Bumthang (central Bhutan) leading trekkers through beautiful and scenic landscape through various flora and fauna with permanent forest covered trees of Cyprus, Juniper, Spurce, Hemlock and Maple.  The trekking trail not only leads you through beautiful tree line but also offers a chance to see Snow Leopard, Takin (National Animal of Bhutan), Musk Deer, Blue Sheep, Tibetan Wolf and Himalayan Black-Bear. This ultimate journey truly awaits an unforgettable and wonderful experience for those entire adventure enthusiast.

Today at your arrival in the airport, clearing the immigration and custom formalities the local representative form Wild Mountain Adventure will meet you and after finishing short introduction drive to Thimphu the only capital of the country. Your drive from the airport to the capital Thimphu takes around 55km and will reach in one and half hour. The capital lies in a steep valley with alpine forests, golden roofed monasteries and temples scattered throughout. The drive takes you through traditional settlements and terrace of rice fields. Having entered the capital city it is unlike many of the city in the world with no high-rise buildings, no traffic lights! The traffic is directed by policeman, and with only one main street. This bustling and colorful city lies at an altitude of 7700ft/2350m. Your sightseeing in Thimphu includes, a leisurely walk in the main downtown of the city, through alley and lane ways with its tiny shops and teahouses and exploring the handcrafted artesian products around the street, if you are here on the weekend, the weekend market provides with freshly local products like churned butter, forest mushrooms and a vast array of chilies both fresh and dried. Visit the impressive National Memorial Chorten(stupa). It was built in 1974 by the mother of the Third King of Bhutan in memory of her beloved son. The complex is visited by many people from all walks of life throughout the day and is the most public religious place in the city. Drive further uphill to explore the valley view of the city with giant golden Buddha statue of Buddha Dodrelma. Your last stop of the day is Trashichhoe Dzong the “fortress of the glorious religion”. It can be visited in the evening after five or if you are here on weekend Saturday and Sunday is open during the daytime. This giant fortress is the throne house of the king and the main secretariat building and the central monk body.

Your drive takes you crossing Dochula Pass, which lies at an elevation of 10150ft/3100m. The beautiful pass offer one hundred and eight chorten (stupas) built by the eldest Queen Mother Ashi Dorji Wangmo Wangchuk along with Druk Wangyel Lhakhang (temple) lies above the parking lot. Beside this magnificent chorten(stupas) in an amazing setting you will be able to spot some of the great Himalayan peaks like – Mt. Masa Gang(235012ft/7165m), Mt. Tsenden Gang(23228ft/7100m). Mt. Teri Gang(23944ft/7300m), Mt. Zongaphu Gang the “Table Mountain”(23288ft/7100m), Mt. Gangkhar Puensum(24735ft/7541m), and many other permanent peaks of Himalayas like – Mt. Jejegangphu, Mt. Kangphug Gang. From the lofty pass the downhill drive takes you through Lobesa village under Punakha (5000ft/1525m) and then cross the Wangdue province through dramatic landscape with scenic beauty and scattered settlements unfolds  along the route and finally takes you up through Black Mountain via Pele La Pass (11070ft/3375m) which is marked by a small chorten(stupa) and prayer flags. You descent downhill through slopes covered with bamboos, which is the favorite food for the yaks in the vicinity and passing through several impressive landscape and scattered settlement you will finally reached Trongsa(6800ft/2073m). The valley is enriched by natural beauty and was home for the past royal family. This historically recognized place today is transformed into culturally significant icon. Visit the impressive Trongsa Dzong built in the mid-sixteenth century. From here your drive takes you uphill till you reached Yotung La Pass(11000ft/3354m) and then finally descent down to Bumthang valley through passing another Keki La Pass(9300ft/2835m) and then to the main centre of Bumthang the Jakar Valley which lies at a cool 8450ft/2576m).

After your breakfast in the hotel, heading through the main road below the Jakar Dzong proceed up the valley for around seven kilometers till you reach the wide open valley below the exquisites Kurjey Lhakhang for your adventurous trekking journey. The trail takes you with a gradual climb through following the river of Yoleng Chhu(river) which is famous for the abundance of trout’s. From here the trail takes you through ascending uphill and finally reached Gorsum where your campsite is set and located at an altitude of 3120m.

Your trail takes you through dense forest of Spurce, Hemlock, Cypruss, Juniper and Maple taking you through muddy path and finally leads you ascend gradually uphill till you reach your final campsite which lies at an altitude of 3160m.

As your trail continues further, the trail takes you through similar route like the previous one. Walking through dense forest your trail offers a gentle uphill walk and then finally drops you to your campsite, which lies just above the tree line. The vegetation thins out in this area.

Your trail form Tsochehchen begins with a gradual uphill climbs all the way, until you reached the top of Juli La Pass, which lies at an altitude of 4700m. On a clear day from the pass the magnificent scenic view of the mountain pass with its surpassing beauty of the landscape will be visible. After crossing the pass the trail takes you descent downhill to a lake at an altitude of 4220m and from there another gradual climb takes you to the top of Gogthong La Pass which lies at an elevation of 4640m. The route from the pass takes you downhill through steep walk until you finally reached your campsite at Duer Tshachu whicl lies at an elevation of 3590m. Beginning from the morning walk till you reached your campsite at Duer Tshachu, if you are lucky, Musk Deer, Herds of blue Sheep and Himalayan Black Bear can be seen along the path.

Today you will spend time at the camp, acclimatizing and drinking or relaxing in the rejuvenating hot spring, because the very highlight of Duer Hot Spring Trek is the Duer Tshachu. You can also make a leisurely walk around the surrounding areas of Duer.

Today your trail reverses back to the precious campsite at Tsochenchen. Its bit difficult as there is slightly more ascending climb than descend. The trail takes you pass through Gogthong La Pass which lies at an elevation of 4640 and then the other higher Juli La Pass which is at 4700m and then finally descent downhill at your campsite at an altitude of 3100m.

We recommend making an early start because the trail is bit long today takes you back to the same campsite at Gorsum leaving the other campsite of Lungsum leading you through dense forest of Spruce, Hemlock, Cypress, Juniper and Maple and finally at your campsite at Gorsum which lies at an elevation of 3120m.

Today you can start your trek a bit late. Your trail from Gorsum is downhill until you reach the nearby bridge in the Duer Village.  After crossing the bridge, you will reach the road head where you will meet your transportation and transfer you to your hotel in Bumthang.

Today at your early hotel check out drive to Punakha. Your drive will transport you from a cool 8450ft/2576m to Punakha that lies at a somewhat lowly 4430ft/1351m. The descent takes you through virgin forest and wild flowers in bloom if you are here in the month of April and May. Crossing the beautiful valley of Trongsa(6800ft/2073m) your drive takes your through natural beauty and landscape. Reaching Chendebji village stop to visit the spectacularly built Chendebji Chorten at the bank of Nikar Chhu(river). Tis startling white stone Chorten is built in the Nepalese style with eyes painted on all four sides. It was built in eighteenth century by Lama Shida of Tibet to subdue the demon who have been troubling the inhabitance of the valley. Passing via Pele La Pass(11070ft/3375m), you will then gradually descent downhill through dramatic range of scenic beauty that unfolds around the route. Though clear days are rare but if you get chance you will be rewarded with views of Mt. Gangkhar Puensum(24735ft/7541m) from the top. Finally your downhill descent brings you to a tiny village of Lobesa(5000ft/1525m), We encourage you to make a short visit to Chemi Lhakhang Temple located atop a small hillock. It is a pleasant 30-40 minute walk from the road ahead. It was founded in 1499 and its worth visiting. After returning back from the temple rush further four kilometers to visit the impressive Punakha Dzong which saddles on the confluence of two giant river of Pho Chhu(Male River) and Mo Chhu(Female River). This extremely impressive fortress in built in 1637 and was the second of the mightiest fortress in Bhutan. It serves as the capital until 1955 and today it still continue served as the winter capital of the monastic body. Returning from the dzong drive to your hotel.

Your drive takes you via Dochu La Pass(10150ft/3100m) and the via the capital Thimphu. If the weather is clear maks a short stop for reviewing the magnificent Himalayan peaks like – Mt. Masa Gang(235012ft/7165m), Mt. Tsenden Gang (23228ft/7100m). Mt. Teri Gang(23944ft/7300m), Mt. Zongaphu Gang the “Table Mountain”(23288ft/7100m), Mt. Gangkhar Puensum(24735ft/7541m), and many other permanent peaks of Himalayas like – Mt. Jejegangphu, Mt. Kangphug Gang. Your drive from the top to Thimphu is only 22 km. Passving by immigration check post – you will finally reached Thimphu and the turn left following the main road that pass below Semtokha Dzong and then continue further for your destination. The drive to Paro from Thimphu is only one and half hour with 55 km. Reaching Paro drive further northern valley of Paro to visit the Tiger’s Nest which is your main purpose of the day. From the parking lot, the walk to Taktsang Goemba is quite an uphill task and may take around three hours walk at an average speed. Ascending this 3000ft/915m cliff you will reach the most spectacularly located Goemba in all Bhutan. The path is well laid. According to the legend, Guru Rinpoche visited this site in the eight century flying from the eastern Bhutan on the back of the Tigress(a form that one of his consort is believed to have taken). He meditated in the cave for three month and in his terrifying form of Guru Dorji Drolo he subdued the demon who is against the preaching of Dharma. After exploring the temple, walk downhill through the same trail to the parking lot. Drive to Paro town and then to your hotel for leisure.

Day 13: Board your flight back to your onward destination