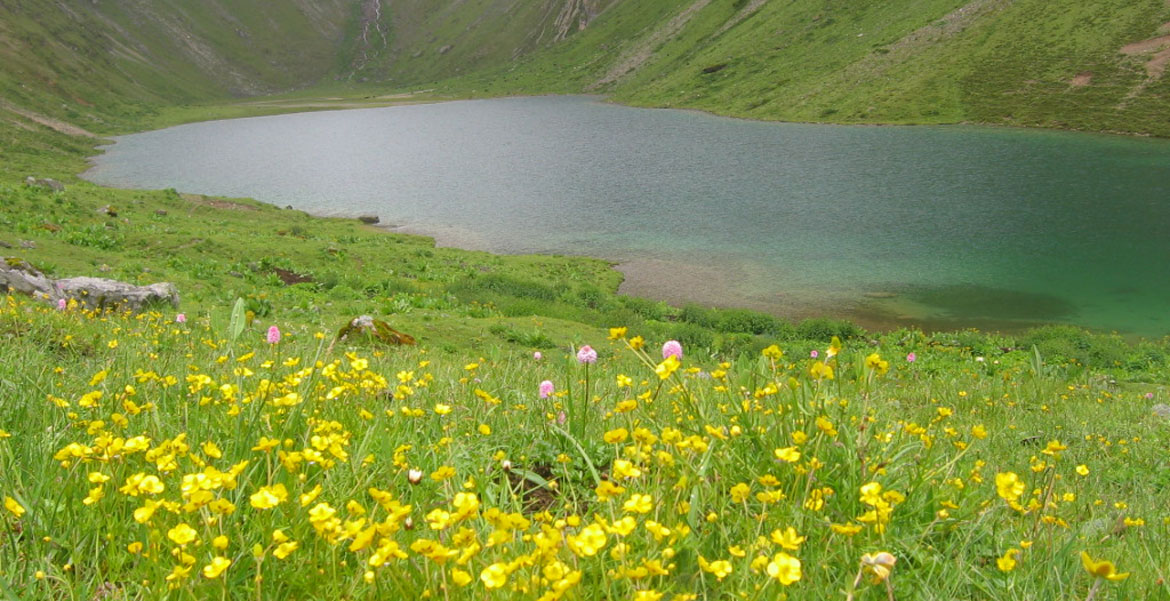 The 6 days Dagala botanical trek is one of the best ways to explore and study the wildflowers of Bhutan. The pristine environment and rich biodiversity of the surrounding region offers a garden growth of botanical flowers. The journey takes you into an area adorned with a multitude of pristine, crystal clear lakes with stunning views of the entire Himalayan mountain range and if the weather is clear you will encounter some f the world’s highest peaks. While this is somewhat strenuous trek, it is well worth the effort because of the tranquility and beauty of natural landscape that you will enjoy during the journey.

At your arrival in the enchanting Paro valley, you will be welcomed with the traditional Bhutanese welcoming style by our tour guide and driver and after short refreshment; you will be transferred to your hotel. Rest day at leisure.

In the morning drive almost up to Chuzom and then take a rough 8km track up to Genekha Primary School, which marks the beginning of your adventure. The trek takes you through crossing a stream and then climb gently uphill through rich forest of oak, pine and rhododendron. The campsite lies in the area of yak pasture surrounded by blue and pink flowers that are ablaze.

Today you have a tough and long trek, walking through fir, spurce, and birch and rhododendron forest. The path winds you through refreshing meadows adorned with wild flowers including Maconopsis bella, Maconopsis grandis, Gentiana phyllocalyx, Gentiana veitchiorum, Lomatogonium bracyantherum, Aster neolegans, Aster albescens, Taraxacum officinale, Taraxacum platycarpum, Iris clarkei, Rhododendron hodgsonii, Rododendron cinnabarinum etc. Before crossing the high pass, if the weather is clear you will hava a spectacular view of several high mountain peaks including Kanchenjunga (Sikkim). Descending from the pass the trail leads you through the meadows and yak herders camp and finally takes you to your campsite right next to the lake.

Today your trail takes you all the way downhill through rich forest of fir, birch and rhododendron till you reach the roadside where you will be pick up by your car and transfer to your hotel in Thimphu

The affluent and vibrant capital Thimphu has been home to the Royal family and the government ministers for more than six decades. It serves as the cultural hub for ten and thousands of foreigners and locals. Well preserved cultural heritages, serene environment and easy accessibility of modern amenities are particularities that sets Thimphu apart from rest of the provinces in Bhutan. Your tour program and sightseeing in Thimphu includes a visit to Buddha point, National Memorial Chorten, Changangkha Lhakhang, Mini-Zoo, Thimphu Dzong, Textile Museum, Weekend Vegetable Market etc. In the evening drive to Paro which is only 65km and can be negotiable within one hour.

We suggest you to make an early start since the hike to Taktsang Goemba is quite an uphill task and takes around 3-4 hours walk at an average speed. The Taktsang Goemba is one of the important pilgrimage sites in the entire Himalayas. It lies perched at 900m up on a cliff overlooking the valley below and is the place where Guru Rimpoche visited and meditated in the cave for three months in the 8th century. Returning back visit the historical Kyechu Lhakhang dated back to 7th century. It is said to be one of the 108 temples built by the Dharma King Songtsen Gampo within a single day in the year 643. Later the place was visited by Guru Padmasambhava and hid many religious treasures and other sacred substances. It is truly worth a visit. After the temple drive to Paro town for your last day shopping buying gifts for your family and friends back at home.

Day 10: Board your flight

A sensational take-off through the scenic mountain views of the Himalayas.