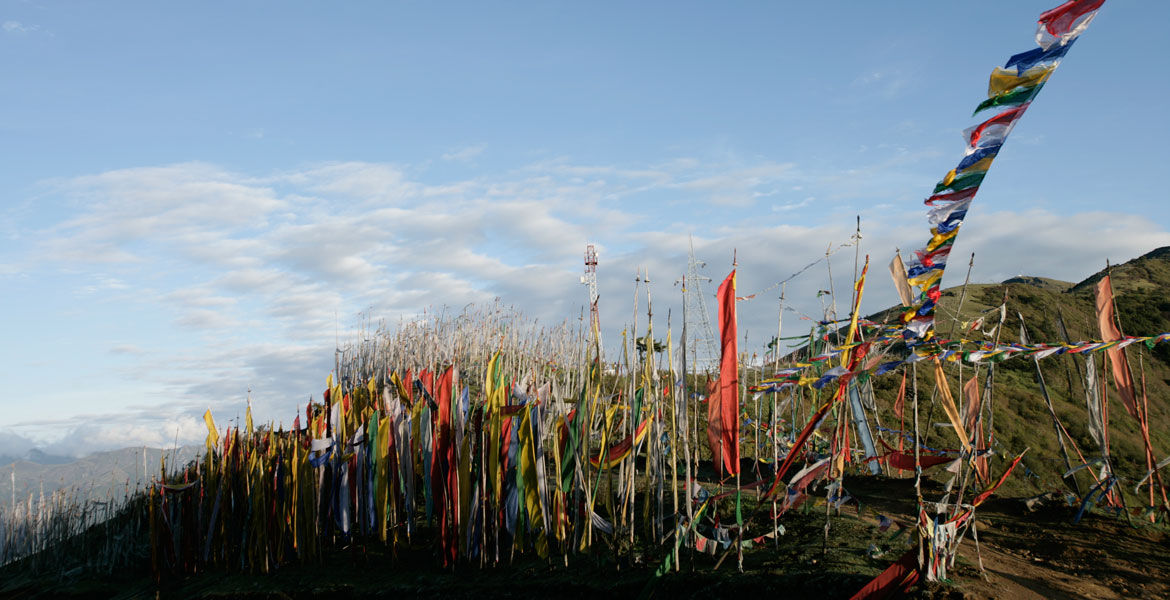 Chelela Natural Trail is an interest short duration trek taking trekkers at a maximum altitude of 3700m above sea level. It is rated as easy trek and best undertaken during spring and autumn months. This ultimate journey starts in the beautiful Paro valley and takes trekkers through densely wooded forests of pine, conifer, and oak, rhododendron that ablaze with blood red and pink blooms in April and May months. The green valley floor carpets with swathes of wildflowers with the surrounding valley offering a magnificent view of the unforgettable landscape. More interestingly on a clear day, as you traverse through the ridge you can also get a breathtaking view of the sacred Jomolhari (goddess of mountains) the spectacular mountain peaking at 24,000ft/7314m along with other Himalayan giants. This short three days trek truly offers an unforgettable experience in the Land of the Thunder Dragon.

Today upon arrival at Paro International Airport, our local representative with a traditional welcoming style will greet you and after a short introduction at the airport, you will be then transferred to the hotel. After a short rest in the hotel, you will be led further for local sightseeing in the picturesque Paro valley. Your sightseeing begins with a visit to the National Museum, which house the collection Bhutanese treasures, with awesome Bhutanese artwork and weapons from centuries. This museum was once the fortified tower. From the museum a leisurely walk down to visit Paro Dzong – an awesome and impressive introduction to the world of dzongs, this massive fortress was later built by Zhabdrung Ngawang Namgyel in 1645 on the present location and locally known as Rinpung Dzong which means “Fortress on the Heap of Jewels”. Coming down from the dzong, drive to the main town and explore somewhat a bustling small township of Paro. In reality Paro is a village now transformed itself into a small town. Today it is undeniably undergoing lots of construction with booming contemporary buildings following the same traditional Bhutanese architecture.

We suggest an early start – This famous Tiger’s Nest lies at an altitude of 3000ft/915m from the valley and 9700ft/2950m from the sea level. A short drive from Paro town to Taktshang Goempa takes around eleven kilometer reaching the parking lot its time for your to embark on your somewhat arduous adventure for the day. According to the legendGuru Rinpoche visited the site in the eight century flying from the eastern Bhutan on the back of the tigress (a form of one of his consort). He spent for three month in the cave meditating and demining his terrifying form of Dorji Droloe subjugating the evil spirit that resides here. The trail to the goempa is quite an uphill task and takes you through beautiful pine forest and many of the trees festooned with Spanish moos.  After reaching a half way there you can veer off, leading to the restaurant for a short refreshment and then walk short distance until you see clearly and seemingly within reach. The main shrine where Guru Rinpoche meditated was built in 1684 by Desi Tenzin Rabgyel an regretfully the old structure was burn down completely in 1998 and restored to thepresent building in the following year. After Taktsang Goemba, walk down the same path to the parking lot and drive to visit Kyechu Lhakhang. This lhakhang dated back to seventh century and was one of the oldest temples in Bhutan along with Jambay Lhakhang in Bumthang. It is worth visiting.

Today, after you breakfast in the hotel drive to Olathang, where you will begin your trek. The trail begins with a gradual uphill through different settlement and mostly covered with conifer and pine forest through delightful farm hoses and farmland with apple orchids. A you continue ascending uphill the view of the valley below with the magnificent Paro dzong provides a interesting look through its terrace fields and dotted farm houses. The trail finally takes you to Chinana where you will set you camp at an elevation of 3500m.

Your today’s trail provides an interesting insight as you traverse through the ridge. The trail begins with a gradual ascend uphill through forest filled with many species of plants and especially the primula and rhododendron are known flowers through this trail if you are here in the spring month of March till April. As you ascend to the Domse La pass the trail takes you through the ridge offering clear view of the valley and if the weather permits the magnificent view of Mt. Jomolhari (24000ft/7314m) can be seen lying on the border to Tibet and is revered as the abode of goddess Jomo. Your campsite lies at an altitude of 3700m.

Today your trail begins with all the way downhill through the valley of Haa and Paro. The trail provides you with dense forest and finally takes you down to Kichu village. Your vehicle will pick you and transfer you to your hotel for leisure.