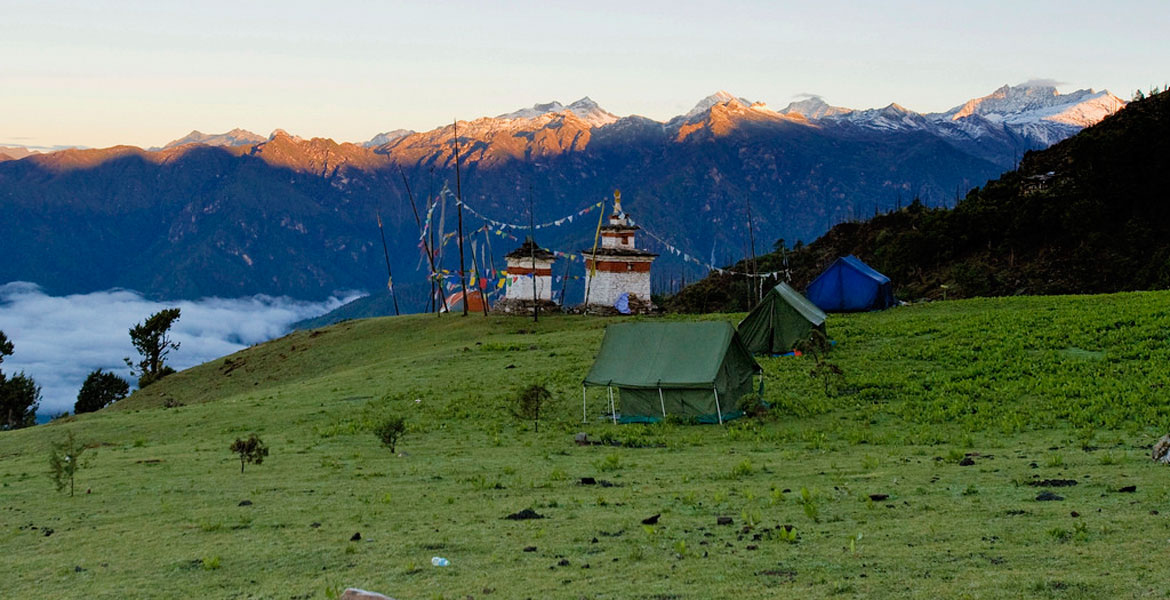 The one night Bumdra Monastery Trek is one of the finest short duration trek opt for visitors wishing to add a day or two trek in their program. The trek takes trekkers from Sanga Chokhor Buddhist Institute in Paro valley and leads you through the pine forest and rhododendron up to the Bumdra Goempa, which is one of the main retreat centre for meditation. Spending a day or two at Bumdra provides an insight into the religious sacred caves around the region; it also provides a panoramic view of the mountain range of Paro valley. The Bumdra Trek is also known as the “Trek of Thousand Dakinis” (celestial female being) where the surrounding area is much noted for religious site, sacred caves and many other to discover. The region from the beginning of your day till the end of your trek trekkers will encounter only the historical temples and monasteries. The highest elevation on this trek takes you up to 3900m – 4000m.

Today at your arrival at Paro airport, our local tour representative will greet you. After short introduction you will be led to Thimphu the capital city that lies at an altitude of 7700ft/2350m. The drive takes you along the Paro Chhu(river) through beautiful settlement of Shaba and Isuna village and finally brings you to Chudzom(confluence) which is the division point of Paro and Thimphu. Passing the confluence you then take your drive along the Wang Chhu (river), the country side between Chundzom to Thimphu provides less forest with many scattered settlement dotted around the valley. Reaching Thimpu, check in to your hotel and after short refreshment drive to visit some of the interesting sites in Thimphu. Your day sightseeing in Thimphu includes, visit to Semokha Daong, which is about 7 km away from the main centre. This impressive fort is built in 1629 by Shabdrung Ngawang Namgyel. It is the oldest fortress in the country and now house the Buddhist studies. Returning back through the expressway drive further uphill of the city to visit the giant golden Buddha statue which is known for Buddha Dodrelma. The top offers a spectacular view of the capital city. Following downhill the same road visit the National Memorial Chorten(stupa) which was built in 1974 by the late Queem mother Ashi Phuntsho Choden built in memory of her late son King Jigme Dorji Wangchuk, the third king of Bhutan. After that drive to visit the National Institute of Painting School which serve a six year course for learning the thirteen arts and crafts. You can also visit the National Library which is close to the Painting School. The library provides the storage and preservation of ancient Buddhist scripts and other religious heritage of the country. If you are here on weekend, visit the local Weekend Market, which is located at the bank of Wang Chhu (river). The market provides an interesting look into the various vegetable and other local products brought here for sale from different parts of the country. At late evening stroll around the downtown of Thimphu city.

Today you will be transferred to Punakha that lies at a somewhat lowly 4430ft/1351m. Punakha is the ancient capital of Bhutan until 1955. The valley of Punakha is much warmer with many paddy field which is famous for the red rice.  The drive to Punakha takes you via Dochula Pass that lies at an altitude of 10150ft/3100m and is one of the beautiful pass in the country. The pass offers 108 Chorten known as “Druk Wangyel Chorten” which was built in 2004under the initiation of the qQueen Mother Ashi Dorji Wangmo Wangchuk. The Pass also offer the magnificent view of the permanent snow-capped Himalayan peaks like – Mt. Masa Gang (235012ft/7165m), Mt. Tsenda Gang(23288ft/7100m), Teri Gang(23944ft/7300m), Mt Zangaphug gang ( 23288ft/7100m), Mt. Jejegangphu Gang, Mt. Kangphu Gang(above 23288ft/7100m), Mt Gangkhar Puensum(24735ft/7541m). From the lofty spot the drive takes you downhill with much turns and curve, passing through different settlements dotted around the hillside and then finally takes you down to Punakha valley. En route visit the Chemi Lhakhang (temple) lies atop a small hillock which takes around 30-40 minute walk from the road head. This small temple has its history dated back to 1499 and its one of the most revered temple in the country. Thousands of people flock to this temple from different parts of the country to worship and seep protection for their child. The temple is built by the Lam Ngawang Chogyel on the site where Lam Drukpa Kinley subdued the demon which is sealed underneath the small black stupa near the temple. Following bask the same track drive to your onward destination of Punakha.

Today your sightseeing in Punakha includes, in the morning drive along the Mo Chhu (river) to the remote Kabji Serigang village. Froh this village your hiking trail takes you through terrace of rice fields and scattered remote villages of Kabji. The trail offers you with scenic beauty and landscape as you traverse further until you reach the hilltop of historical Chorten Ningpo Shedra, which has its connection in the fifteenth century. This monastery provides a beautiful view of the valley below. After exploring the monastery and having spending good time chatting with the monks your trail then takes you through gradual downhill walk through various settlement and rice field. Reaching the highway, you then take the left side trail of Mo Chhu (river) after crossing a long suspension bridge to visit the Khamsum Yueli Namgyel Temple. This beautifully and panoramically located temple on the hilltop above Yebesa village provides another view of the valley and the terrace rice field. It was built in 1999 to bring peace in the world. Walking down hill after crossing another suspension bridge your transportation will wait to see you back with a successful hike. Your last stop of the day – Punakha Dzong or “Punthang Dechen Phodrang”. This is the second mightiest dzong built by Shabdrung Ngawang Namgyel in the year 1937. The dzong is beautifully saddled on the confluence of two river – Pho Chhu (Male River) and Mo Chhu (Female River). The Punakha Dzong served as the capital centre of the country until 1955. The establishment of the Wangchuk Dynasty on 17th December 1907 was took place here and the first National Assembly was also held in the dzong in1953. After the dzong drive to your hotel en route visit the newly founded town of Khuruthang with its central attraction being the Zangto Pelri Temple (town temple).

Your drive takes you following the same route until you reach Paro. In Paro visit the National Museum which used to serve as the “Watch Tower” of Rinpung dzong. Since 1967 the watchtower was re-established as the National Museum and holds a fascinating collection of arts, religious scroll paintings and ancient war armors. From here a short downhill walk through good view of the valley below, take you to Paro Rinpung Dzong. This dzong was built by Shabdrung Ngawang Namgyel in 1646 after the small Hungrel Fort which was built by Drung Drung was offered to Shabdrung Ngawang Namgyel. From here your transportation will collect you and en route visit the Jangsa Dumtse Lhakhang (Temple), which lies just outside of Paro town. It was possibly the only ancient temple built in the shape of a chorten and is literally chained down to the earth since local believe says otherwise it will fly off to heaven. This chorten like temple was built in 1421 by the Tibetain Saint Thong Tong Gyelpo known as “Iron Chain Bridge Builder” who actually came to Bhutan in search of Iron Ore. In the evening stroll around the town.

After a good breakfast in the hotel drive to Sanga Choekhor Shedrag where you will meet with your trekking crew. The trail gradually ascend uphill through blue pine, rhododendron and then through fir forest leading up through the ridge with valley view of Paro. The trail further stretch uphill to Chhoe Tse Lhakhang(temple) nestled on the mountain side, the trail takes you through the ancient trail with commanding views of southern Paro valley and to the north it offers a magnificent view of the snowcapped peaks of the Himalaya. As your trail proceed further it takes you through ruins and fluttering prayer flags and through crossing the dense forest you finally enter a high and wide meadow dotted with sacred chortens and prayer flags. From here the view of the magnificent Bomdra Goemba can be visible and your campsite is located with a blessing underneath the goempa. At your earlier arrival visit the Bomdra Goemba and explore the historical sites of the region. Your campsite is situated around 3800m.

Today your trail takes you all the way downhill through lush green forest with many important historical goembas on the way. The trail brings you via Zangto Pelri Monastery and most importantly the Taktshang Goempa which lies at the Cliffside on the rock face. It is one of the most important Buddhist pilgrimage site and dated back to eight century when the Saint Guru Rinpoche visited the site. It is believed that Guru Rinpoche meditated in the cave for three month and in one of his manifestation form of Guru Dorji Drolo he subdued the evil spirit Sengye Samdrup and turned him the become the protective deity of Taktshang Goemba. The place has been visited by many permanent Buddhist religious leader and is one of the historical icon of the country. After the downhill trail takes you around one hour until you reach the parking lot where you will meet with your transportation and drive you to Paro en route visit the historical Kichu Lhakhang which is one of the 108 temple built by the Tibetan king Songten Gyelpo in the seventh century. The purpose of building this many temple in one day is to pin down the giant ogress who lies stretch throughout the Himalaya. Evening stroll around the downtown of Paro.