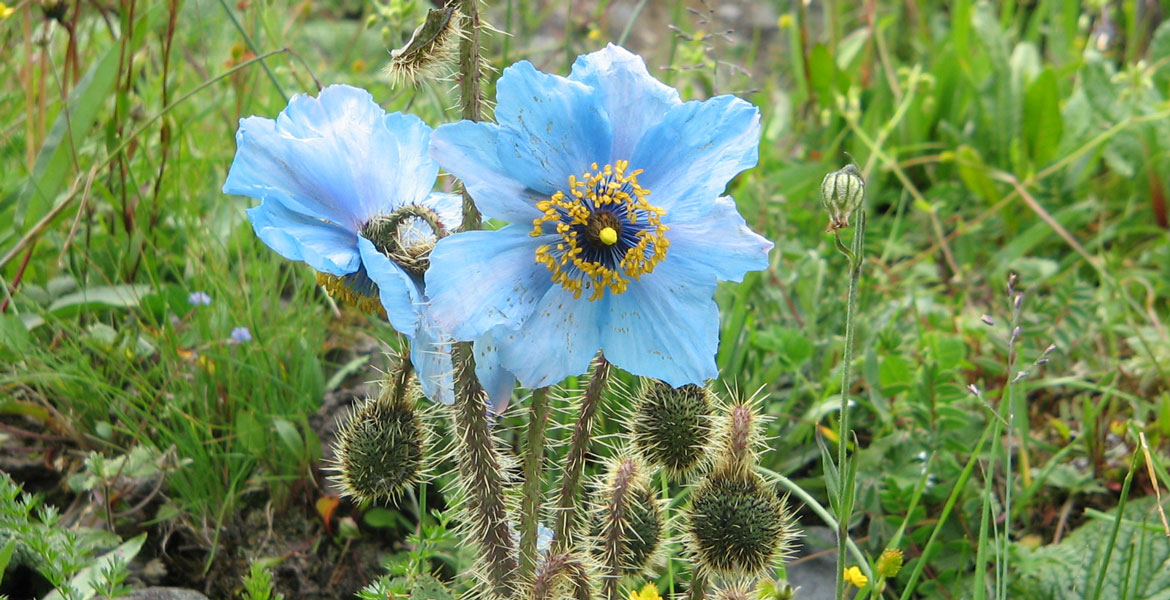 This 11 days botanical photo safari tour offers an opportunity to explore different Himalayan wildflowers including a garden flower that grows in Bhutan. The tour starts in the enchanting Paro valley home to mount Jomolhari (7,300m) situated at the northern end of the valley whose glacier water forms the Paro Chu River flowing through the valley and takes you all the way to the lush green Bumthang valley. It takes you past several valleys and landscape with abundant growth of different variety of wildflowers including several different types of rhododendron that are ablaze in blood red, pink and white blooms.

On arrival at Paro airport, our local tour guide and driver will greet you. The drive to the only capital Thimphu (7,700ft/2350m) is only 65km and easily negotiable in 1.5 hours. The capital lies in a steep valley with alpine forests and is unlike most of the capital cities of the world. There are no high-rise buildings, traffic density is very low and traffic is directed by policeman. Full of opportunities, Thimphu has something for all visitors including the mighty Simtokha Dzong, strategically located at the crossroads of routes to Thimphu and Punakha. It is only 6km out of Thimphu town, and was the first dzong constructed by Zabdrung Ngawang Namgyel in 1629 and now houses the School for Buddhist Studies. Having entered Thimphu, make one quick stop before lunch and visit the impressive National Memorial Chorten. The chorten serves as a gathering place for the young and old. It was built in 1974 by Her Majesty Ashi Phuntsho Choden Wangchuk in memory of her son the late King Jigme Dorji Wangchuk, the third king of Bhutan, popularly regarded as the “Father of Modern Bhutan”. After lunch, visit the National Institute of Zorig Chusum (painting school). The institute was initiated by Royal Government of Bhutan to preserve the invaluable heritage and promote arts and crafts in Bhutan. During the class hours, students are taught painting, calligraphy, embroidery, woodcarving, sculpture etc. offering a six years course on traditional crafts for those who are artistically inclined. Just below the National Institute of thirteen crafts is the grand Bhutan National Library known for the major sculpture repository with a number of important functions dedicated to the preservation and promotion of the rich cultural and religious heritage.

Your last stop of the day, the Tashichho Dzong or “fortress of the glorious religion”. With its superb sense of propitiation and space, it carries an aura of regal dignity. Its history dated back to 13th century and initially erected in 1702 by 13th Druk Desi Sherab Wangchuk and later in 1955 after moving the capital to Thimphu from Punakha.

Beside the cultural, historical and traditional splendor, it is time now to savor the enchanting pristine natural beauty of Thimphu valley. There are several day walk program available depending upon your availability and interest.

Your drive to Punakha is 77km and takes around 3 hours. We suggest you to make an early start since, on a clear day, the view of the eastern Himalayas from Dochula pass (10150ft/3100m) are possibly one of the best in the country. It is only 22km to the pass form the capital Thimphu and can be negotiable within 45 minutes. Beside these, great Himalayan peaks in its amazing setting the pass also offers 108 magnificent chortens. These groups of chortens are known as Druk Wangyel Chortens or “Chortens of the Victorious Druk Gyelpo”. Queen Ashi Dorji Wangmo Wangchuk initiated the building of these groups of chortens in 2004 to honor the victory of the fourth king and his people for their victory in the war fought in the southern regions of Bhutan during 2003. From this lofty pass, the descent is mainly through virgin forest with magnolia trees blossoming in April. En-route stop at Lamperi Botanical Park that offers different species of rhododendron that are in full bloom in their natural habitat. Of the 46 rhododendron species recorded in the country, 29 are found in Lamperi Park.

Your descent to Punakha is only 36km till you reach the small village of Lobesa, from here you turn left towards Punakha that lies at a somewhat lowly 4430ft/1351m. En-route stop at Chemi Lhakhang, a small 15th century temple famous for its fertility endowments/rites due to the blessing of Lama Drukpa Kuenley. The temple sits on a small hilltop and is a pleasant 30-40 minute walk from the road head. Returning from the temple, drive to Khuruthang for lunch.

After lunch, visit the Punakha Dzong, the dzong saddles on the confluence of two rivers, (Pho Chhu and Mo Chu). The dzong was built in 1637 and it was named “Pungthang Dechen Phordang (Palace of Great Happiness). It is surrounded by myths and stories and for that matter, you can ask your guide to unfold it for you. The dzong serves as the capital of Bhutan until 1955. The establishment of Wangchuk dynasty on 17th December, 1907 took place here and the first National Assembly was also held in the dzong in 1953. Today, Punakha dzong continue to serve as the winter residence of the central monk body. In the evening drive to your hotel.

Today you retrace your track back to Lobesa (5000ft/1525m), and proceed 8km to Wangdue, with its dzong strategically located on a hilltop overlooking the valley below. For about 12km, the road runs above Dang Chhu River and then gradually ascents steep climb until you reach Lawala pass at 10800ft/3293m. Your drive takes you through admiring sweeping valley with broadleaved forest. If the weather is clear, you are rewarded with views of Mt. Jichu Drakey, Kangbum and other peaks. In summer the surrounding landscape are alive with vibrant blooms of red, pink and white rhododendron along with the valley floor carpeted with rich flowers of primulas. Arrival on the ridge, the descent takes you through fields of rhododendrons and other wildflowers. En-route you may even encounter some yaks and odd barking deer and red panda.

As you enter the valley, your first glimpse is the sweeping view of the 450-year-old Gangtay Goemba lies atop on the hillside overlooking the valley below. The glacier Phobjikha valley is famed for the migratory Black-necked Crane that makes it their winter home. The birds migrate from Tibetan plateau and can be observed from mid October to end of March. Detail of the crane habitat and habits are available at the Crane Information and Observation Center.

After a quick look around you can locate a beautiful spot to relax over a well, deserve lunch before you trace your hike from Lungtey to Phobjikha. From the pass a short drive descent downhill gradually to Longtey valley from where you will start your hike. The hike takes around 3 hours and takes you through groves of fir trees. Your trail gradually ascent through rich forest of rhododendrons and other wildflowers amidst through dwarf bamboo and finally takes you to the ridge where you will have a fascinating view of the surrounding Phobjikha valley with Gangtay Goemba monastery rising amidst the beautiful valley.

We suggest you making an early start since, the view of the several mountain peaks can be visible from the top of Chelela pass. As you descent from the pass your drive takes you through Longtey village, passing through evergreens forest of fir and finally enters the broadleaved varieties until you cross Trongsa. There are several stops en-route for photographing flowers along the way. On your arrival at Trongsa (6800ft/2073m), make a quick visit to the impressive Trongsa Dzong. It is intricately layered into the hillside, in complete harmony with the surrounding nature. The dzong was the ancestral home of the royal family, built in 1648, built by Chogyel Minjur Tenpa on the order of Zhabdrung Ngawang Namgyel. Later the dzong was enhanced by Druk Desi Tenzin Rabgyel in 1771 and now contain twenty three temples.

Having taken the sight of Trongsa, the road now leads you to Bumthang region. It is only 65km and can be negotiable within 2 hours. The road takes you steep above Trongsa for 22km till you reach the high point of the drive – Yotongla pass at 11000ft/3354m. En-route you will see several wildflowers including different species of rhododendrons that are ablaze in red, white and pink. From the top the road descents downhill and gradually enter Chumey valley with beautiful farmhouse and farmland blooming with fields of colorful crops. After passing Chumey the road now climbs uphill through blue pine on to Kekila pass (9300ft/2835m). From this lofty pass your destination is only 9km and lies at an elevation of cool 8450ft/2576m. Reaching Chamkhar town, drive straight to your hotel.

After your leisurely breakfast in the hotel, drive to Ura valley. The road takes you past the turn off to Tang valley, climbing up to the lofty Shelthangla (11,500ft/3506m) that is about one and half hour drive from Jakar. Just before the pass, you will be rewarded with the fame Table Mountain and Gangkar Puensm, which lies in the north-west direction. After the pass, you gradually enter the enchanting Ura valley. It is one of the finest and exemplary village clustered together to form a beautiful village famed for Masutake mushroom. After Ura return to Jakar via same route.

Early hotel check out drive to Punakha en-route visit to Trongsa Dzong. It is possibly the finest dzong in the country built in 1648. Trongsa Dzong is the ancestral home of the royal family. Both the first and second kings of Bhutan ruled the country from this ancestral seat. All the kings hold the post of Trongsa Penlop prior to being crowned as Kings. After the dzong continue your drive to Punakha. En-route you can stop to take photos of the wildflowers those blossoms alongside the road.

Early hotel checkout, drive to Paro and check-in to your hotel. After short relaxation drive to Chelela pass and indulge your visual senses with some natural beauty and give yourself some time to soak and relax in the breathtaking environment. The pass is at a cool crisp 12,200ft/3720m and the road takes you through a spectacular lovely forest of pine, oaks and rhododendrons that are ablaze with blood red and pink blooms. The surrounding valley floor carpets with swathes of lilac primulas and other alpine wildflowers including the edelweiss. In the evening return to your hotel.

At your early hotel check out, drive to the base of Taktsang and hike for 3-4 hours. The goemba perched on a Cliffside at a height of 900m from the valley floor. According to legend Guru Padmasambhava came to Taktsang in the eight century, flying from the East of the country on the back of a tigress (a form that one of his consort is believed to have taken). He meditated in the cave for three months and then donning his terrifying form of Dorji Droloe subjugating the evil spirit residing in the region. After him many permanent Buddhist religious leader visited the site and meditated including Langchen Pelki Singye, notable Milarepa, Lama Phajo Drukgom Zhipo. the Iron Chain Bridge Builder popularly known as Drubthob Thongtong Gyelpo, Zhabdrung Ngawang Namgyel, the fourth Druk Desi Tenzing Rabgyel etc. Today Taktsang is one of the holiest pilgrimage sites in all of Himalayas.

On your way, back visit the historical Kyechu Lhakhang. This is one of the 108 temples built by the Tibetan King Songtsen Gyempo in the 7th century to subdue the giant ogress that lay across the Himalayas. After the temple drive to Paro town which is only 5km. Stroll around the town for your last day shopping and buying gifts for your family and friends back at home.

After your breakfast, drive to the airport